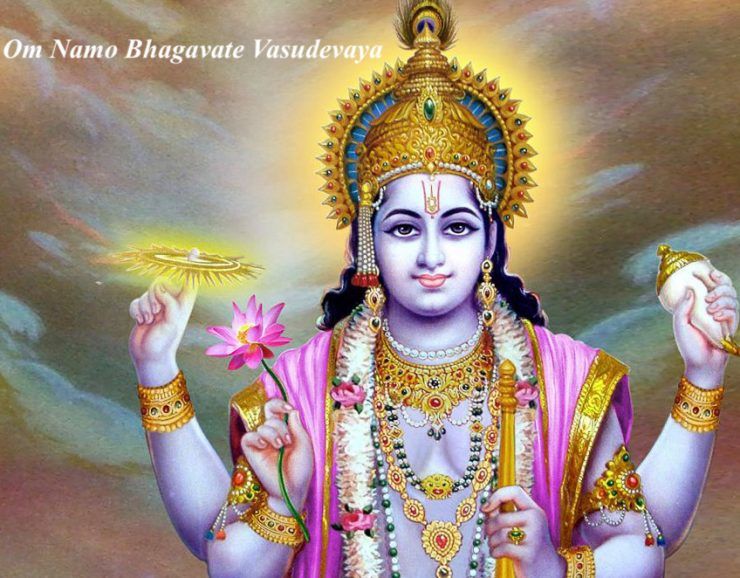 Do you know the mantra Om Namo Bhagavate Vasudevaya? It is a powerful invocation of the god Vishnu, incarnated on Earth as Krishna.

Sacred traditions testify that this mantra would liberate from samsara, the cycle of incarnations. It would also help the mind to let go of its preoccupations to rely entirely on the Divine.

The mantra of liberation

The mantra we are interested in in this article is one of the most popular Hindu mantras. Central to Vishnuism (the branch of Hinduism centered on the worship of the god Vishnu), it is presented as follows:

Known as the Dwadasakshari or "12-syllable mantra", this formula is associated with Vishnu, god of supreme protection. According to several Hindu traditions, it is even the main mantra of this god.

It is addressed to him in his incarnation as Krishna, his main avatar. The Hindu sacred texts thus explain that Vishnu incarnated on Earth in the guise of Krishna to promote peace and harmony among men.

This is a mantra of liberation, called moksha or mukti mantra. Traditionally, it is said that the repetition of Om Namo Bhagavate Vasudevaya liberates the practitioner from the cycle of incarnations and rebirths, or samsara. It would connect to the Divine, and help to become one with it.

Found in the ancient sacred text entitled Vishnu Purana, Om Namo Bhagavate Vasudevaya can be translated as "I bow before Lord Vasudeva (another name of Krishna).

However, interpretations of its general meaning vary. For example, in the tradition of Kripalu yoga, this mantra is also understood as "I bow before the divine light within. It is then more a mantra oriented towards personal spiritual growth. In any case, this mantra is addressed to a supreme deity or a higher force.

The formula can be broken down as follows:

• Om is the primordial sound, the sacred vibration of the Universe, containing universal energy,
• Namo can be translated as "bowing down" or "paying homage to", and is frequently used to mark abandonment to the sacred,
• Bhagavate can be interpreted as "he who is divine", or "in the image of god",
• Vasudevaya can either refer to Krishna, the god (devaya) of light (vasu), or to the infinite presence of Brahman, or God in Hinduism. Thus, this mantra is generally understood as worship of God under the incarnation of Krishna.

Use and benefits of this mantra

You can choose to use the release mantra in many ways!

Traditionally, Om Namo Bhagavate Vasudevaya can be recited or sung at a meditative rehearsal known as japa. To do so, state the mantra for 15 minutes in a position comfortable for you. Then remain in silent meditation for as long as you wish to allow yourself to be impregnated by the energies of the invocation.

If you have little time but still wish to integrate this mantra into your daily life, you can also repeat it to yourself during the day. For example, a routine task like washing dishes or cooking can become a meditation, where you focus on Om Namo Bhagavate Vasudevaya!

You should also know that this sacred hymn, sung regularly, will have some notable benefits. It will protect you from the surrounding negative energies and place you in a powerful and beneficial vibratory sphere. It will also help to eliminate obstacles, just as for example the mantras dedicated to the god Ganesh. Finally, repeating this mantra will contribute to a peaceful mind and harmonious thoughts.