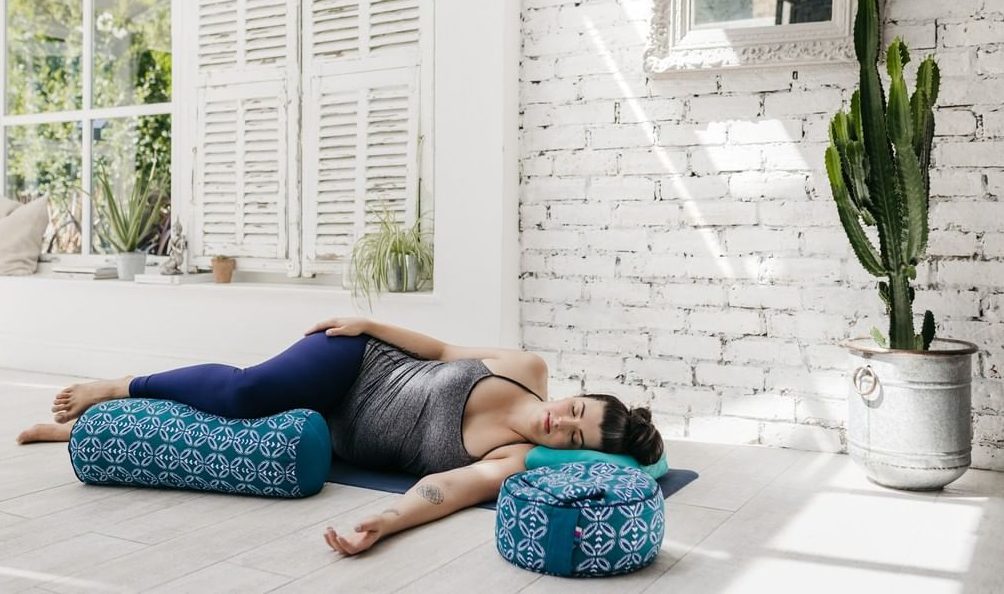 Do you want to take up yoga but are wondering if Yin Yoga is for you? Don't worry, this style of yoga inspired by Chinese philosophy should bring you a lot. Looking for information on its benefits, principles or history? In this article, I explain everything about Yin Yoga.

Let's be honest. When was the last time you did nothing? I mean, without moving, without thinking, without even... scratching your nose.... It's been a long time, hasn't it?

Imagine walking into a yoga class for the first time and really allowing yourself to slow down. You're lying on your mat, in a position that invites you to relax all your muscles, to lay your body completely on the floor. And where you find stillness in your body, your mind finds stillness in turn. The race of thoughts stops. You press the "Pause" button.

Your concerns move away as the minutes pass within your posture. Two, five or ten minutes... You maintain this position, without forcing, without pain, while feeling the intense stretching that is created in you. Immobile, calm, you observe what is released in you, simply through this absence of movement.

This is just about how a Yin Yoga class can make you feel. But better than words to tell you about it, there is practice... Let's see what it's all about before you get on the mat for your next class.

What is Yin Yoga?

Yin Yoga is a style of yoga that comes from Chinese philosophy. Its principles are inspired by Yin and Yang. You probably know this symbol which represents two poles:

- on one side the yin, the black side, refers to the feminine, the moon, the water, the night, the fluidity, the passivity and the slowness.
- On the other, the yang, the white side, corresponds to the masculine, action, sun, day, fire, speed and self-assertion.

Whether we are a man or a woman, these two polarities reside in each of us, the trick is to know how to balance them. Moreover, as you see in this symbol, there is Yin in Yang and Yang in Yin. This allows us to remember that everything co-exists together, that nothing is absolute (all white or all black). In every trial, there is joy, in every man, there is a feminine part, in every happiness, there can also be unhappiness...

Our way of life is very Yang oriented. We are always stimulated and active, everything has to go fast, etc. Thus, practicing a soft and slow yoga like Yin Yoga, allows us to find an inner balance and thus brings us a lot of well-being. Indeed, the risk, if we are too much in Yang, is to know the negative aspects of it: exhaustion, irritability, burn-out to name a few...

From China to the United States, a short history of Yin Yoga

But where does Yin Yoga come from? This style of yoga was founded in close connection with Taoism and Chinese philosophy. It was created by an American named Paulie Zink at the end of the 20th century. As a teenager, Paulie Zink was trained for ten years by a martial arts master of Chinese origin and became a master of kung fu. He thus discovered Taoist culture and learned to observe nature and animals.

It is from this learning that he was inspired to create his own current of yoga, in connection with the Taoist philosophy. Although he integrated a form of Hatha Yoga into it, Paulie Zink developed his own variations, including meditations and a philosophy based on energy and his own mystical experiences. Yin Yoga as Paulie Zink envisioned it is based on the five elements: earth, metal, water, wood and fire. He calls his style "Taoist Yoga" and begins to transmit it little by little around him.

Yin Yoga was then popularized in the United States by Paul Grilley, who learned alongside Zink in the 80s. Paul Grilley was only able to receive the first level of the art that Paulie Zink had imagined. However, he has long contributed to enriching this practice and passing it on. Finally, yogini Sarah Powers also had an important role in the history of Yin Yoga. After learning the basics of Taoist Yoga, she continued to develop this style of yoga, which she helped to make Yin Yoga.

" The purpose of Yin Yoga is to break out of systems of social convention, indoctrination and mechanistic ways of thinking, not to reinforce them by demanding adherence to rigid and limited paradigms. Intellectualizing the practice of Yin Yoga would obstruct a deeper understanding of its essence. Its true power is to authorize the truth that lies within each of us. " - Master Paulie Zink

What are the principles of Yin Yoga?

In practice, Yin Yoga sessions consist of a series of positions and stretches, which will last 5 to 10 minutes, or even longer over months of practice. It is a gentle yoga that invites relaxation and complete relaxation. It is mainly practiced with positions on the floor. Its goal is to bring calm and relaxation to the body and mind. To reach this deep meditative state, so dear to Yin Yoga, each part of the body needs to rest for a few minutes. This is why we will hold the Yin Yoga positions for as long as possible.

The fundamental principles of Yin Yoga are as follows:

- Respect for the limits of the body: listen to your body, never in pain, find the right degree to work without getting hurt.
- Calm and serene attitude: do not seek performance, take the time, focus on the present moment.
- Prolonged maintenance in each position: immobility is important in Yin Yoga, one will also bring a slow and deep breathing as well as a calm and attentive mind. 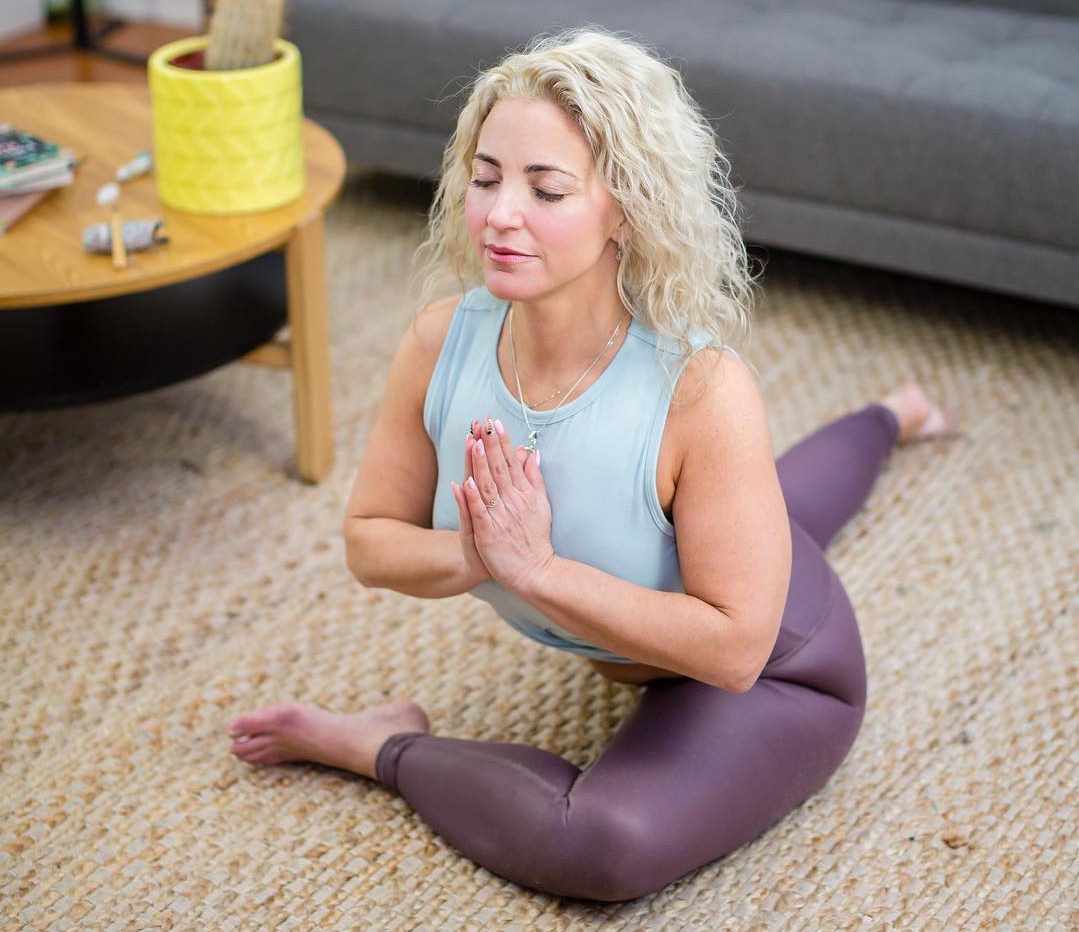 The specificities of Yin Yoga

In our ever-changing world, we often forget to do nothing. In our lives, there is no time to pause, contemplate or witness silence. As a result, even when we want to do yoga, we find it difficult to stay still during meditation. Therefore, we like to explore dynamic yoga styles such as Vinyasa Yoga or Ashtanga Yoga. But then again, our balance is also based on our Yin side. Our ability to slow down, to do things slowly and to simply be there, without movement, without urgency.

Yin Yoga is a yoga practice where the sessions are composed of only 6 to 8 postures. They are usually performed on the floor and held for several minutes. You can use yoga bricks or bolsters to maintain the weight of the body in the postures. In Yin Yoga, we let gravity work for us. We also let ourselves be inspired by our teacher, who gently leads us towards a little more serenity.

It is a gentle yoga, but not without intensity. You may not believe it, but you will work a lot in stillness. Yin Yoga is a style of yoga where you work in depth on muscles, ligaments, tendons, joints... You practice a lot of stretching. It is therefore the ideal yoga if you want to improve your flexibility. Often, the sessions focus on certain areas of the body. For example, opening of the hips, stretching of the lower or upper body...

You will not necessarily sweat while doing Yin Yoga. On the other hand, you will certainly have aches and pains the day after your sessions, because it works the body in depth. Thus, it is a very beneficial and complementary practice to dynamic yoga.

Are you afraid of being bored? That's what Yin Yoga is all about.

During a Yin Yoga session, your body simply works through breathing and gravity, but your mind will have to work as well, so as not to sink into your thoughts. Personally, when I practice Yin Yoga, I always find it a particularly difficult style of yoga. Not that its postures are impossible to achieve or that its rhythm is too hard to hold. But because it's almost impossible for me to stay still for more than a minute. My body wants to break the immobility all the time: scratching, wanting to move my legs or hands, tingling... But the worst is my mind! I am very distracted by what surrounds me and my thoughts are constantly bubbling. In reality, it is a yoga that has its share of challenges but from which one always comes out calm and very serene.

The benefits of Yin Yoga

The benefits of Yin Yoga are numerous. Of course, one could mention all the benefits of a yoga practice. But it also brings other aspects:

Yin Yoga is accessible to everyone at all ages, from beginners to the most experienced. It allows you to discover another approach to yoga different from that found in Hatha Yoga or other styles of yoga.

You now know everything about Yin Yoga. All you have to do is roll out your mat and allow yourself to slow down in your next yoga class.