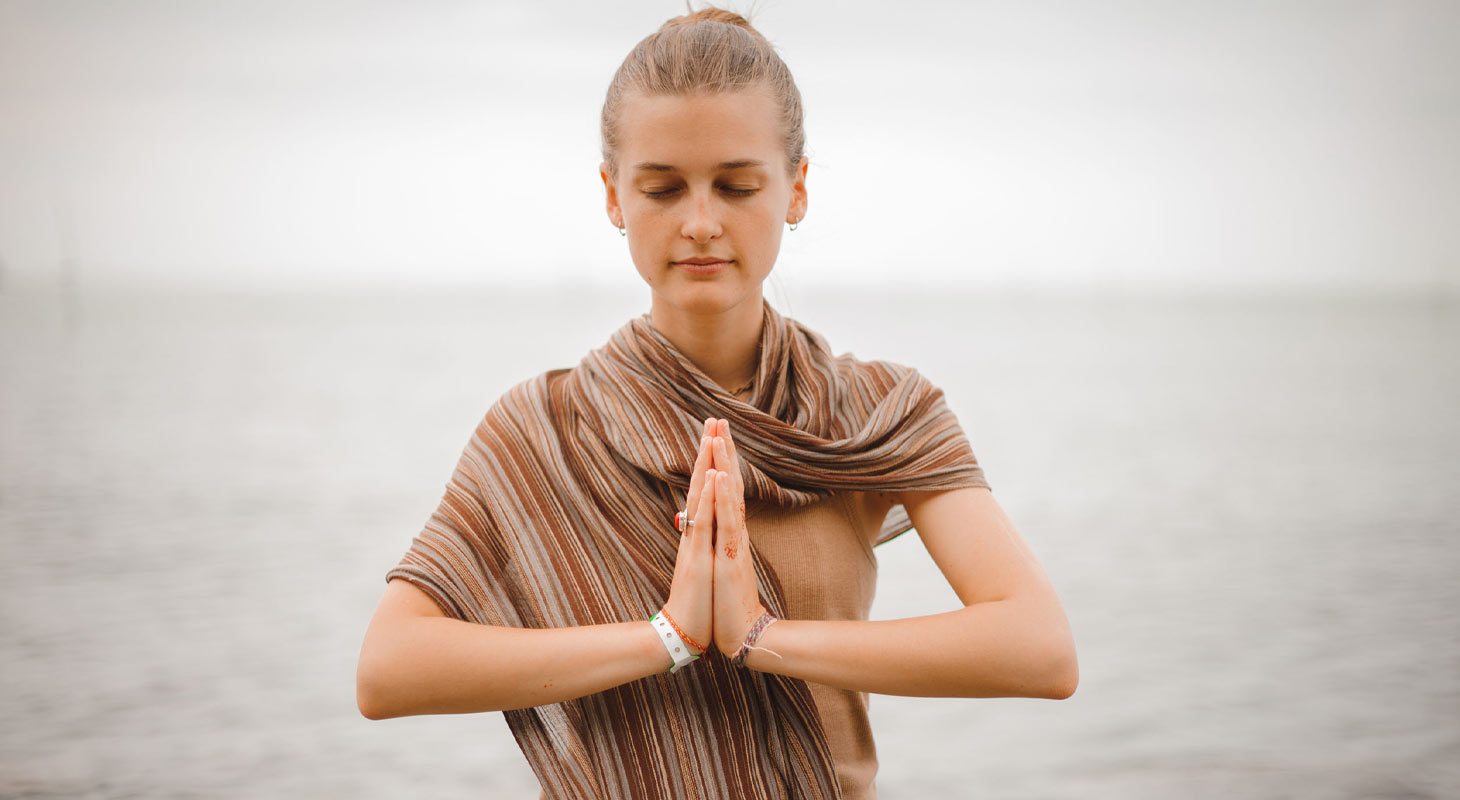 Often we hear the yoga teacher say the Hindu expression "Namaste", accompanied by a gesture of greeting. At the beginning or at the end of the session, this word is systematically used, but unfortunately, most of the time, few people know its true meaning.

Do not hesitate to do the test, by yourself, and ask students in a yoga class if they know the definition of the term Namaste, you will find that very few of them have the answer. What's even sadder is that only a small number of teachers teach the Indian vocabulary that is specific to yoga. Usually this word is confused with "Thank you", which is not entirely true. Let's discover together the meaning of this Sanskrit word!

The origin of the word Namaste in Sanskrit

Did you know that its origin dates back to the ancestral Hindu culture in India? This Indian statement is derived from Sanskrit, one of the languages spoken during this distant era. To put it simply, Sanskrit is therefore an ancient language, originating from the Vedas (sacred Vedic texts, which are Buddhist and Hindu religious writings). It corresponds, to little extent, to Latin for Europeans. Today, it turns out that this greeting is particularly used in India or Nepal, although it is increasingly used in the West. It is also considered a mantra in Hinduism.

How to translate Namasté ?

Very simply, in Sanskrit, Namaste literally corresponds to a word in 3 syllables: Nama, which means "to bow", as means "I" and finally té is translated by "you". Concretely, we can therefore conclude that this expression means: "I bow to you". It's as simple as that!

Finally... For the purely transcribed part, because for the rest, there are some specificities to know. In general, the meaning of the word and gesture Namasté is clearly spiritual. The Buddhist or Hindu religion highlights the presence of a divine light in each one of us. It is therefore used as a gesture of recognition which is equivalent to a sentence such as: "The light that is in me recognizes and salutes the light that is in you".

Beyond a simple greeting to say hello or goodbye, it is also a profound thanksgiving and a mark of respect that we ask for or show. To deepen the Sanskrit term, you can also translate Namas by "nothing is mine", which means that you are not a part of me.

Be careful not to confuse Namasté with its variants

Usually, Indians greet each other mainly with one of the following phrases: Namaskar, Namaskaara and Namaskaram. Whether they are at home, on the street or on public transportation, this is how they start a conversation. In fact, today, Namasté is the most common form of greeting, saying hello or goodbye to each other, regardless of age group, and even if they are complete strangers.

If you've ever heard someone say Namaskar during a yoga class (which is quite likely), you should know that it is more of a "classic" greeting, literally "I do my greetings". It can therefore be used to greet a group of people, while Namasté is preferred for greeting an individual with a very personal and inner divine greeting.

The expression associated with the plural
Richard Rosen, a very famous yoga teacher and author of 5 books on the subject, confirms that the word Namaste should be addressed exclusively to one person. To greet a group of individuals, the word must be given in the plural, i.e. : Namo Vaha. The locution Vaha designating the plural of te (or "you").

Namasté: more than a word, a gesture!

For novices or yoga enthusiasts, it is important to know that Namaste is not only a simple word, it is also a symbolic gesture. As you may have noticed, when one person greets another with the Indian mudra, the latter usually accompanies his word with a unique gesture. This is a mudra: a gesture that is not associated with any religion. Indian cultures believe that a conversation between two or more people is first and only through the mind.

With this concrete gesture and by joining their hands in front of their chests, the Indians believe that their spirits will be able to meet. According to Buddhism, everyone has a part of divinity in themselves and through the mudra, they also salute this divinity. It is also the conviction that the divine spark, located next to the heart, will be listened to and heard.

What is a mudra in India?

To get to the point, mudra is translated in Sanskrit as : "sign", "gesture" or "seal". Each syllable corresponds to its own meaning Mud being bliss and Dhra being happiness. Each of these signs has a deep meaning and is linked to a part of vital magic. 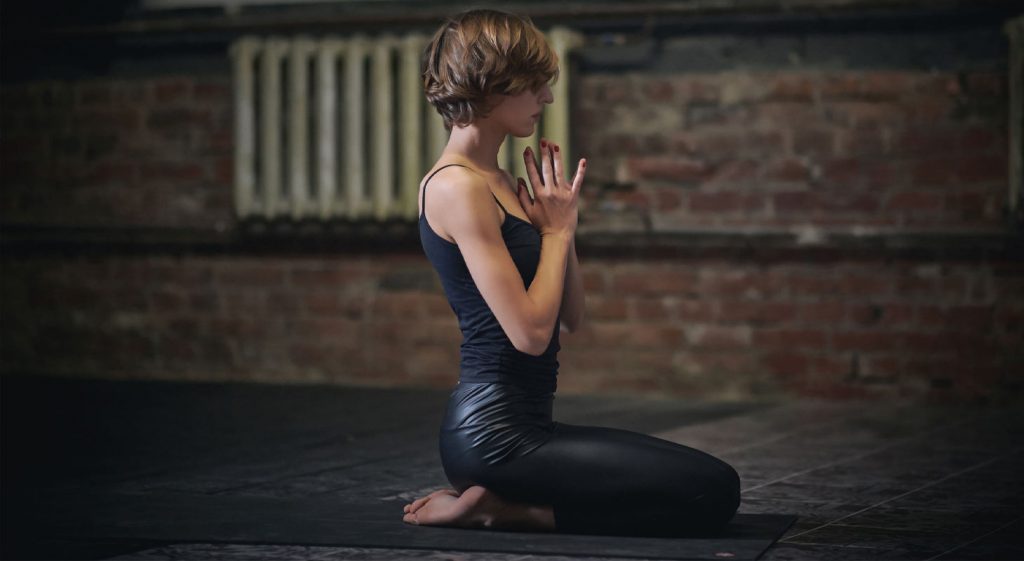 How to do the gesture of Namaste correctly?

With experience, it is possible to understand Namaste easily according to the gesture associated with it. Yes, there is not only one gesture that is specific to it.

1. To begin with, the simplest and most traditional :
→ Simply join the palms of your hands, one against the other, in front of the heart chakra (one of the 7 main chakras), close your eyes and bow forward. Bravo, you have just made your first Namaste!
→ At this moment, you close your eyes while performing the gesture, this is a way to focus more deeply on a particular intention, which comes from the heart and to share the love that circulates in your environment.

2. For the second way of greeting :
→ It is possible to do exactly the same process, simply by changing hands. In other words, you join your hands again and position your thumbs directly against the Third Eye (the point between the two eyebrows). Same as in the previous version, close your eyes and lean forward. After standing up, also remember to bring your hands back to the heart chakra.
→ This marks a deeper and more intense form of respect than the first one. Generally, it is used to greet a master (religious, teacher, etc.).

3. Finally, the last way of greeting is the following:
→ Apply exactly the same procedure as the second possibility, only this time the hands are positioned above the head. Bow with your eyes closed, then straighten up and bring your hands back to the heart chakra.
→ It should be applied only as a greeting to the gods. It is usually practiced during religious rituals.

To know the specificities of a Namasté

Small precision, if one gathers the hands at the heart chakra, it is closely related to the closed eyes, that is to say that it increases the flow of divine love. It is a way to let go and help the mind "reach" the deities. Moreover, it is quite possible to practice Namaste to oneself, as a meditation technique, to enter in harmony with the heart chakra more deeply. This principle also applies when practiced with another person, meditation is simply much faster, as it creates a true connection with that person. In particular, it allows you to explore your chakras more easily.

The Namaste meditation exercise is ideal for those who do not have the time to really dedicate themselves to it. Think about it! 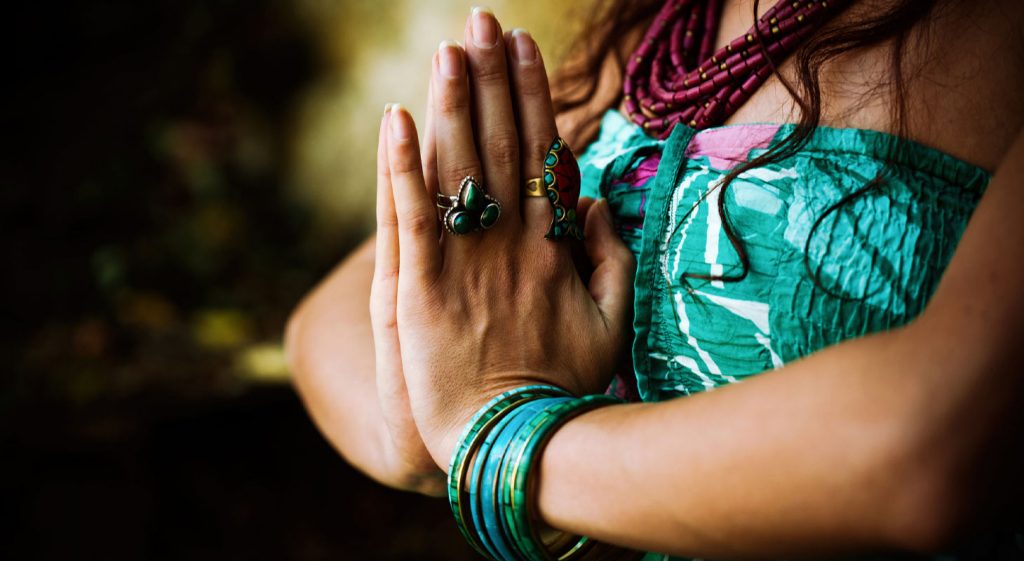 When is the best time to do a Namasté?

Regardless of who is practicing Namaste, whether it is your yoga teacher or yourself, this mudra, as we saw earlier, first helps two people to make a connection with each other. The principle is simple: after a certain time, your energies merge and offer the possibility for your ego to be released more easily.

To practice Namaste, you must have an open heart and a peaceful mind so that souls can be united. Ideally, it should be done both at the beginning and at the end of the yoga session. But it is rather usual to hear it only at the end of the session, since it is at this time that the body and mind are most at peace and that they allow a better harmony of energies in the room.

More generally, the first to initiate the mudra is the teacher himself in order to thank and affirm his respect for his students as well as for his own masters. Then comes the turn of the students to make contact, in response to their teacher.

A Namasté is a good way to show gratitude and express feelings towards the experience itself, but also towards the collective moments of sharing, after a yoga or meditation session. In practice, it is a way to be grateful:

• to yourself to thank the yogi within you,
• towards the teacher, always present to guide and help the students,
• to the other students with whom you shared the session,
• and finally, all those who preceded you and who have allowed yoga to become more democratic.

To understand Namasté is also to go beyond a simple vision of it. It is necessary to take time to contemplate the deeper aspects such as the spiritual or the philosophical. Since salvation emerges from the depths of the heart, it creates powerful bonds, even between fundamentally different individuals, both in terms of expectations and social classes.

It is good to know that yoga and meditation are disciplines that offer immediate and often overlooked benefits. When practiced regularly, they can strengthen your awareness of the present moment, to be more anchored in your current life. In other words, you limit your sources of worry, unnecessary judgments and questions that disturb your inner self. You are much more Zen thanks to very effective relaxation postures and breathing exercises. Through Namaste, practitioners express their humility in front of humans, but also in front of the universe itself.

Some say they feel a shiver of emotion, logically joy, when they greet the teacher and other students with a Namaste, after a yoga or meditation session.

Finally, more than just a word and a gesture, Namasté is a philosophy of life! It allows us to adapt our behavior according to the daily situations we face. To improve, even more your feeling towards him, see it as a moment of inner peace, which triggers a chain reaction towards the outside. Use it to resolve tensions or conflicts that interact negatively in particular areas of your life. As a flow of energy that you send to your family, friends, colleagues to convey your sense of gratitude.

If you don't believe or doubt that this can happen, think for a moment about how easily you can become sad or even depressed after dealing with someone who is totally negative in both word and deed. Remember this phrase:

Yes, it may seem absurd to some, but Namaste is able to improve your relationships, whatever they are. Remember, it means: "I bow down before you", is nothing more than the expression of your vision of the person in front of you, that is to say, as he or she is. In this way, you offer a particularly powerful intention by making him or her understand that he or she is a special person. As long as Namaste is done with the heart, it can only be beneficial for both the giver and the receiver. Be aware and be ready to see a person beyond the physical envelope, but for what they are deep within!

It is not just a simple "hello" between two friends or colleagues, but a moment when you are present, with them, and nowhere else. The physical, mental and energetic presence is essential to weld a good relationship, even better, it is a gift out of time that you give them.