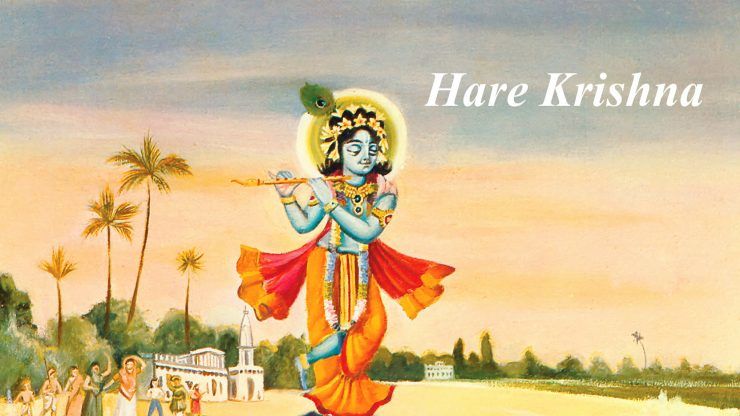 Perhaps you already use mantras in your daily spiritual practice?

But did you know that, according to Hindu and Buddhist traditions, it is possible to reach a connection to the divine presence through them?

These repetitions of words with high vibration indeed plunge the practitioner into a particular state of consciousness. An inner state that connects him/her to the divine within.

In this perspective, the mantra Hare Krishna is a particularly powerful formula...

The mantra Hare Krishna is a sacred verse in Sanskrit, which is recited to cultivate an awareness of the divine presence within oneself. Here, it is through the name Krishna, one of the many forms of God in the Hindu tradition, that this connection is made.

Anchored in Vishnuism, one of the most important currents of Hinduism, the mantra Hare Krishna is central to Bhakti Yoga. This branch of yoga emphasizes devotion to a deity in spiritual practice.

Also known as the "Great" mantra, the mantra Hare Krishna has only four lines. These successively evoke the various deities and their energies:

This mantra can be broken down as follows:

• Hare refers either to the energy of Hari (the god Vishnu) or to Hara, which refers to Vishnu's spouse, Shakti,
• Krishna and Rama are both avatars (incarnations) of the god Vishnu.

This mantra will be chanted as an invocation of God, or the divine presence. It can be translated as follows: "O Lord, O divine energy, thy will be done through me".

If you are not comfortable with the notion of God, you may perceive this mantra as a kind of magic formula. A set of words that connects you to your own power. This inner presence that guides and cares for you.

Connecting to the divine presence

According to the Vedas, a set of sacred texts, one of the most effective ways to access divine consciousness is the chanting of mantras.

It is an ancient spiritual practice, in which the repetition of sacred words and phrases deepens concentration. Bhakti yoga uses mantra chanting as a means of relying on supreme or universal consciousness. The mantra Hare Krishna is said to be particularly powerful in connecting the practitioner to this inner divine presence.

Celebrated by the great sages and Vedic scriptures for thousands of years, this mantra has very ancient origins. In particular, it gained popularity outside India in the 1960s through the Hare Krishna spiritual movement.

The repetition of these sacred phrases would have the capacity to generate powerful energy, which would go beyond the layers of body, mind and intellect. A transcendental vibration that would connect the practitioner to a higher vibration, Krishna consciousness, or divine consciousness.

It is a subtle state of consciousness, where inner harmony with the Divine dispels any sense of separation and promotes a deep sense of connection.

How to use the Hare Krishna mantra?

Traditionally, Krishna devotees recite the mantra using rosaries called malas. These malas help the reciter to follow the number of prayers sung. This devotion to a deity through the practice of mantra chanting is known as japa.

You can also integrate this powerful mantra into your own practice by chanting it in the traditional way, using a mala. Sitting in a comfortable position for you, then scroll through the beads one by one each time you complete a sequence. Soon you will feel a deep relaxation invading you, accompanied by a feeling of clarity and inner calm.