The Cross of Ankh 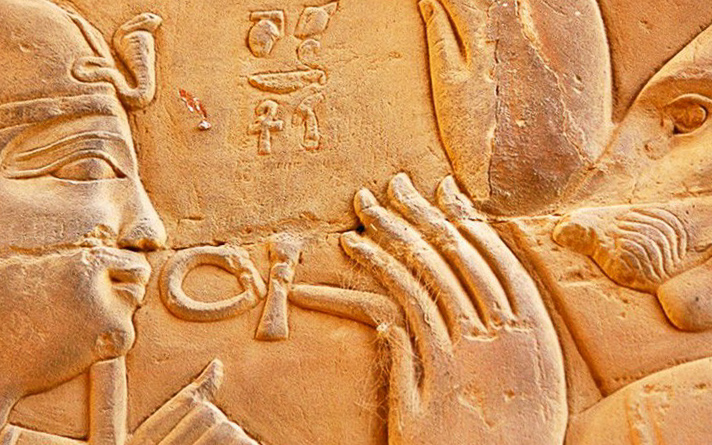 The Cross of Ankh

The ankh cross, also known as the Egyptian cross of life, cross ankle, key of life, or simply the ankh, is a very special hieroglyphic sign.

Of obscure origin, the two branches surmounted by a loop evoke a mystical and secret universe. Much more than a simple hieroglyph, associated with the Egyptian gods, the ankh is in fact a unique and meaningful symbol.

Whether as a protective talisman, a representation of life and eternity, or an emblem of earthly existence, it can be understood in many ways.

Discover with us the ankh cross and its fascinating metaphysics...

The cross of ankh, a strange Egyptian hieroglyphic

Have you ever observed an ankh? It is in the form of a cross with a long vertical branch and a smaller horizontal one, topped by an oval handle. It looks like a Christian cross, but with a loop at the top.

It is found in various colors, associated with a particular function:

One can feel when observing ankh, an occult and magical aura. Instinctively, the ankh cross can evoke a key to another world. Or an esoteric object with unknown powers.

Its troubled origins only thicken the mystery surrounding this symbol...

The first appearances of the Egyptian cross of life date back to the 4th millennium BC in ancient Egypt. More precisely, it begins to be used from the dynastic period, stretching from 3150 to 2613 BC. It then appears in the famous Egyptian hieroglyphic alphabet. The alphabet consists of symbols representing various aspects of daily and spiritual life.

Surprisingly, however, the ankh is the only hieroglyph that does not have a precise origin or concrete meaning, unlike the other signs. It seems indeed to refer to multiple aspects of the existence, at the material as well as metaphysical level.

The ankh cross is particularly visible in religious pictorial representations inherited from ancient Egypt. Among these representations are the murals on the walls of temples and tombs. It is associated with several deities depicted in Egyptian art. In particular, the goddess Isis, queen of the gods, but also Sekhmet, goddess of war, or Atum, god of the sun, often wear it in both hands with her arms folded over her chest.

As much linked to the life of men as it is to that of the gods, the ankh has a cosmic and global dimension. It underlines the divine descent of the pharaoh. Pharaoh is often depicted with the Egyptian cross of life in his hand. The ankh is also a symbol of protection for both the living and the dead, and it is very present in frescoes in burial spaces, especially at the feet of the deceased.

The meanings of the ankh cross

To grasp the overall meaning of the ankh cross, we can first look at the etymology of its name. The word "ankh," or "anokh," is Egyptian for "life. The ancient Egyptians understood earthly experience as a fraction of a larger, eternal life: that of the soul. The anokh cross therefore most probably symbolizes life in a global sense, with its earthly, finite aspect and its non-earthly, infinite aspect.

Let us recall that this notion of immortality of the soul is found in many cultures and religions, including Hinduism and Judaism. It is also very interesting to note that the word "anokh", also used in the Hebrew language, can be translated as "I am God". The anokh would thus be among men to remind them of their divine and eternal nature.

Many have seen eternity in the symbol itself and its particular form. Thus, the vertical branch would connect Earth to Heaven and thus represent the divine aspect. The horizontal branch would represent the ephemeral passage on Earth. The oval loop, finally, would symbolize the immortality of the soul or deities present on Earth. Some have also perceived the cruciform part of the ankh as emanating from its circular part: it would then be the terrestrial, material dimension of life, which emerges from its divine, immaterial aspect.

In this metaphysical understanding, the ankh is still described as the key to knowing the secrets of life and death, uniting the eternity of the spirit or soul as the fundamental essence (loop), and the cyclic mortality of the body (cross) as the temporary envelope. 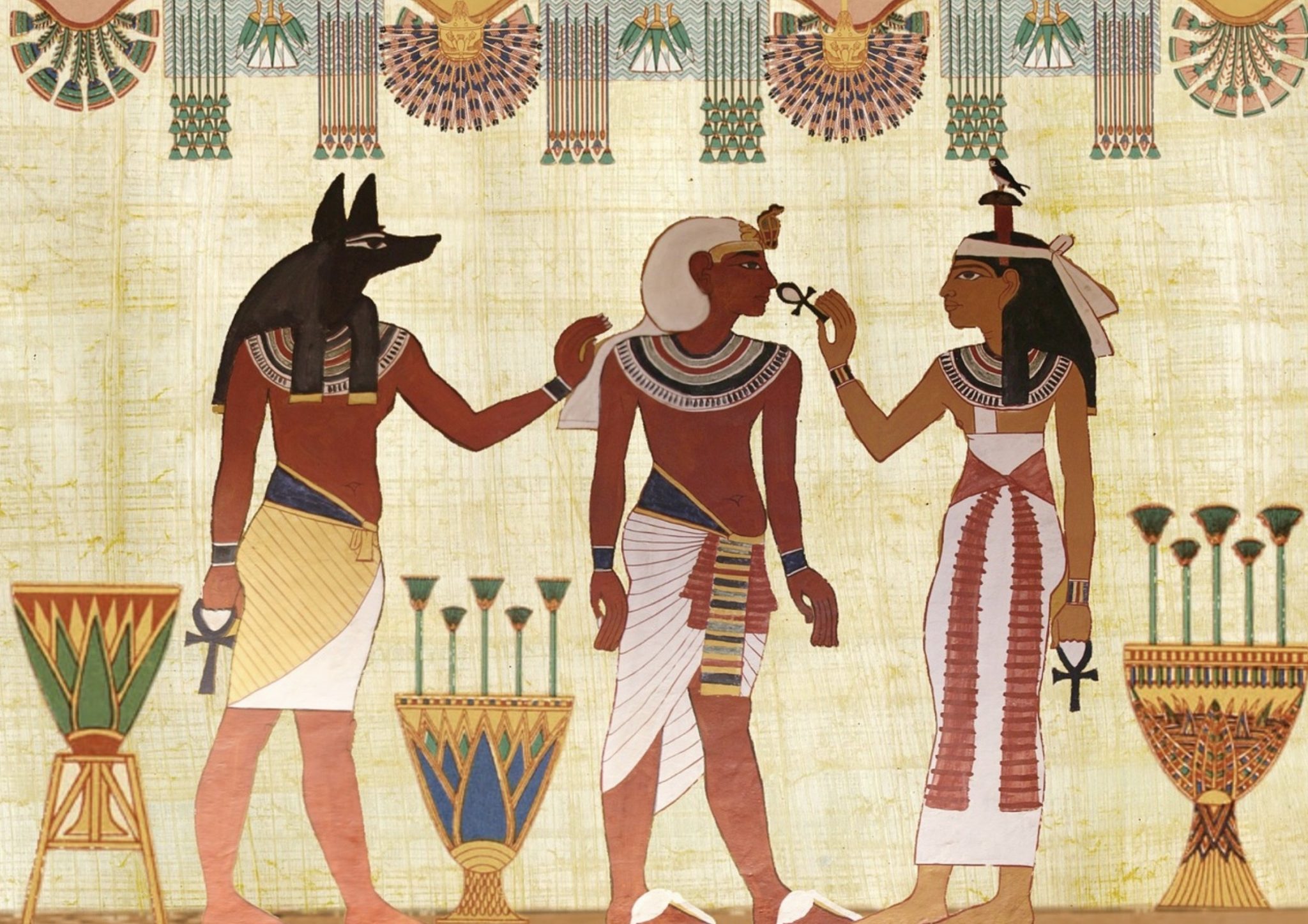 A representation of the masculine/feminine

Have you noticed this fascinating fact? In all cultures there is a conception of life as the union of the Feminine and the Masculine.

From yin/yang in Chinese philosophy, to the Sun and Moon in the yoga tradition, human civilizations have always represented the Universe as the emanation of a subtle balance between a creative, masculine principle and a receiving, feminine principle. The two principles make up everything that exists, from stones to living beings and plants.

At the metaphysical level, these two energies would also cohabit in the human being, and this, independently of sex. The masculine would then manifest itself through structured thought, creation and outwardly directed action, and the feminine through meditation, emotions and the gestation of ideas.

In Egyptian tradition, the masculine is associated with the god Osiris, linked to the sky, and the feminine with the goddess Isis, linked to the earth. The cross of ankh would be a symbol of this universal understanding of life as a union between heaven and earth, between the masculine and the feminine. The oval loop would then represent the feminine womb, matrix of Life, and the vertical, phallic branch, creation by the masculine. The horizontal branch would finally form the arms of the "children" of this creation, the human beings.

A reference to the earth

A complete symbol, the ankh would refer as much to the metaphysical and spiritual dimension of life... as to concrete elements of daily and earthly existence in Egypt!

For example, many people have seen it as a representation of the Nile, the river that crosses the region. As the main source of water for agricultural production, the Nile was (and still is, to a lesser extent) a source of life and wealth for the Egyptians. While the vertical branch of the ankh would symbolize the Nile valley, where Upper Egypt is located, its oval loop would represent its delta, a region of Lower Egypt.

The ankh would, finally, be the symbol of an element of everyday life of the most modest ... the sandal! More precisely, it would represent the buckle surrounding the ankle, and would refer to movement, evolution, and thus, again, to life. Some theories also suggest that the buckle, implying the action of connecting one element of the sandal to another, would be a magical symbol. Magic also consists in linking several aspects of the world together, in establishing a bridge between the visible and the invisible.

Even in its humblest sense, the ankh cross thus always assumes an occult and powerful dimension...

Moreover, from the 19th century onwards, it became a symbol of magic in its own right for Western mystics. A vector of strength, abundance and protection against misfortune. It is thought that the Egyptians themselves wore it as an amulet to promote good health.

Fascinated, as we are, by the multiple meanings of the ankh cross? Do not hesitate to share this article with your friends and family!