Meaning of the Mandala 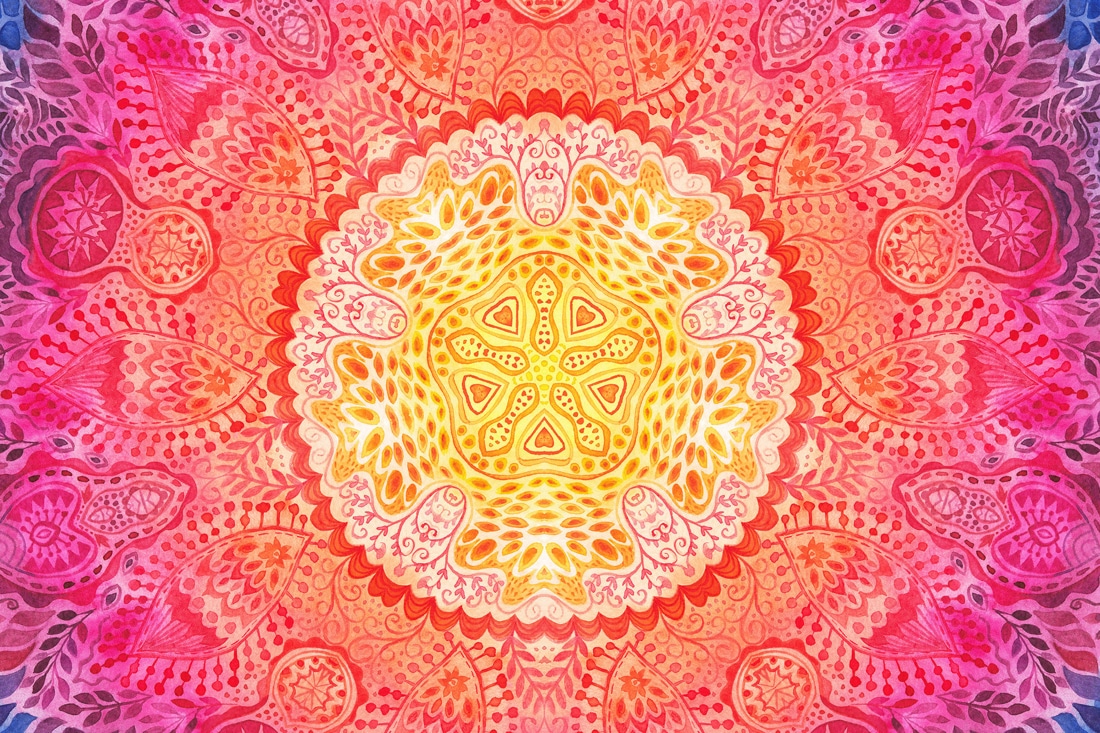 Meaning of the Mandala

Mandala, native to Mesopotamia, literally means "circle", "center" or "sphere", by extension "environment". It is a symbol used in many cultures of Eastern countries for more than a hundred years. It is also called "flower of life" or "egg of life". It symbolizes the microcosm with the body and the macrocosm with the universe.

The Mandala presents itself as a protective circle for the spirit and an emblem of spirituality. Starting from a central point, it can take many forms ranging from very simple to very complex with lots of details. Combined with meditation and the quest for harmony, its cosmological geometry reflects inner peace among Buddhists.

The specificities of the Mandala tattoo

The Mandala, a cosmic and spiritual motif can be tattooed on several parts of the body. People who have gone through and overcome difficult times can testify the balance restored through a Mandala tattoo. However, this tattoo represents an assignment to meditation. Its aesthetic style cannot be used only for decorative purposes. As a source of meditation, it is seen as an invitation to connect with the universe.

People tattooed with a Mandala are seeking a strong spiritual connection. The fascinating aspect of this symbol also calls for contemplation. Admiring every detail of this ornamental motif takes hours. This symbol is a sign of good luck. A source of attraction for good spirits, light and harmony, it is a kind of guardian angel. The Mandala tattoo represents yin and yang. Indeed, Buddhists who use it during their meditation can master every facet of their karma.

The Mandala tattoo for women

Lotus, pink, floral style can decorate the Mandala tattoo for women. Flowers, laces and animals such as butterflies, wolves or tigers add a touch of femininity to the tattoo. The Mandala can be combined with a feather, a letter, a first name or a sentence. It goes perfectly with a tree of life and a cosmic or astrological style.

Watercolor, pointillism or dotwork and oldschool are among the most popular styles for women, as they provide heavenly results. It can be done on several parts of the body, especially on the forearm to bring out its feminine and spiritual side.

The Mandala tattoo for men

The power and connection brought by the flower of life tattoo is very fiery. It brings a spiritual symbolism. The men who wear it are balanced spiritually and mentally. Through its different geometric forms, it blends in with any color and nature of skin. In addition, it perfectly marries several parts of the body.

To bring out its effect, this tattoo can be done on the knees, the torso and the back. The majority of the Asians draw it on the arms or the shoulders. Moreover, the color and the style vary according to the convictions of the tattooed persons. Other models reflect finesse and nobility while others represent divinity and spirituality. Dotwork and neo oldschool are among the most popular styles of Mandala tattoo.

The Lotus Mandala, an exception

The lotus means eloquence. It is a flower that draws its vital resources from water. It inspires beauty and grace, mysticism and spirituality. Blossoming on the surface of the water, it symbolizes rebirth. During the reign of the pharaohs, this flower was engraved on Egyptian tombs. The blue, red, and purple lotuses represent enlightenment and spiritual ascension. It has a very important symbolic value in eastern cultures. Moreover, some religious ceremonies serve only to display its great value.

The Lotus Mandala made in dotwork also represents peace and eternity for the Hindu culture. Indeed, Brahma, the creator of the Hindu religion appeared from a lotus flower. A mystical and spiritual living being for Buddhists, it represents consciousness in itself and harmony. The lotus flower exists in white, pink, blue, red, green and purple. Each color of the lotus flower represents a well-defined meaning. The white or pink lotus symbolizes devotion and chastity. The green lotus can be used as a gift for those who want to balance their life.

What is the meaning of colors in a Mandala?

The color of a Mandala is to be chosen according to the request. This choice requires meditation in order to discover the essence of life.

• In Asia, black is the color of the west, where the sun sets. A Mandala colored with this pure and dark color symbolizes meditation, it also conveys reflection and concentration to be able to untie the being from negative things.
• Coloring Mandalas in red inspires happiness and good mood. This color guides your thoughts towards fixed ideas while helping you to realize them.
• Orange conveys ardor and contentment. For Buddhists, it is the color of worldly devotion to eminent spiritual goals. Its strength, less fiery than red, inspires joy.
• White is synonymous with transparency and air. Leaving white space in the Mandalas symbolizes the connection between the supreme spirit and the mind. In addition, it represents the wish to possess higher thoughts or to reach higher levels of thinking. These states of mind will help to understand the divinity in humanity. Indeed, the color white is a component of the northern direction that symbolizes the supreme mind.
• Blue is synonymous with sublimity and spirituality. Mandalas with the color blue represent the surpassing of all limits. Indeed, this color transmits spiritual openness and imagination.
• Yellow is the color of the spirit which represents the intellectual, the intelligence, the wisdom of awakening, clarity and fulfillment. It conveys gratitude, excitement, clear-sightedness and serenity. It is also the symbol of growth and evolution.
• Brown represents the color of the earth and the fields, which transmits new beginnings and new discoveries. The past is cleared and new life appears.
• Purple symbolizes the mastered combination of the material and the spiritual, the perfect marriage of us and the self. The Purple Mandala transmits playfulness and transcendence linked and in balance.
• The green in a Mandala symbolizes the earth and thus our generally expansive individuality. It is a symbol of precision, naturalness, obviousness and logic. It represents the need for a personal space to grow the seeds that germinate in our being.