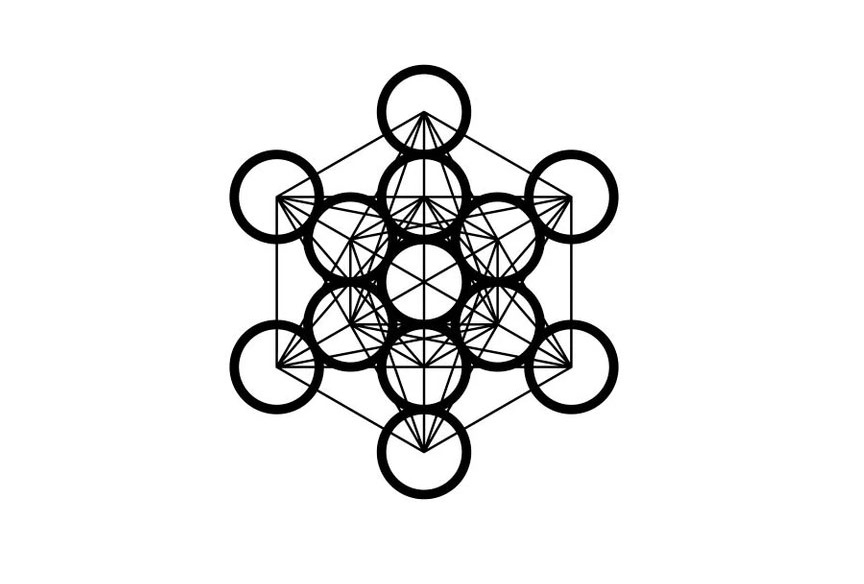 A symbol with multiple meanings, a refined synthesis of the Universe and its different facets... The Metatron cube is a fascinating motif.

Associated with the archangel of the same name, it is invoked to seek the protection and guidance of the subtle worlds. It is also used to promote healing and harmony.

Intrigued by the Metatron Cube? Read on and discover the most powerful motif of sacred geometry...

Who is the Archangel Metatron?

Before looking at the Metatron cube, let's first look at the winged being whose name this sacred symbol bears...

Metatron is an archangel, that is to say a powerful angel to whom is attributed the delicate mission of accompanying humans on Earth. He appears notably in the sacred texts of Judaism, including the Talmud.

Metatron assumes an essential status in the celestial worlds. Archangel closest to God, it is he who unites all the angels and archangels. Some traditions even describe him as God's right-hand man, having helped God to create the Universe. In short, he is one of the most influential archangels of the divine worlds!

A power which is also found in the various translations of his name. There are thus several etymological interpretations of the word "Metatron", all pointing to the important role of the archangel in the heavenly and earthly spheres.

Thus, one of the most common theories proposes a translation of the word in "meta-tronos", that is to say in Greek, "the assistant to the throne". A translation that emphasizes the role of God's helper that is frequently attributed to him.

Nevertheless, the general meaning given to the name of Metatron, nicknamed the Archangel of the Archangels, is that of a heavenly guide, showing the way to men.

Some ancient texts claim that Metatron was human before his ascension to the celestial worlds, unlike his winged companions.

With his earthly experience, Metatron makes a strong and reliable link between Earth and Heaven. He understands the difficulties, needs and workings of human beings, and therefore knows how to guide them on the path to fulfillment and awakening.

The Metatron Cube: Description and Meaning

The Metatron cube is a symbol of sacred geometry. As a reminder, this esoteric discipline brings together motifs found everywhere in the Universe, from the constitution of atoms to stellar systems. It focuses on channelling the energies of these forms to help healing and spiritual development.

The Metatron Cube is considered one of the most powerful symbols of sacred geometry. This is partly because it brings together a large number of mystical geometric patterns into one form.

Its strength can be perceived by simply observing it. Thus, if you contemplate it for a moment, you may be as captivated by its complexity as you are by its powerful vibration. No wonder it is associated with the Archangel of the Archangels!

The cube of Metatron is thus made up of various sacred forms, including :

• The Flower of Life, powerful form
• The Merkaba, a mystical symbol helping the human to transcend the different planes of existence,
• Plato's solids, three-dimensional patterns omnipresent in nature.

These are particularly interesting to understand the power of the Metatron cube. Plato's solids are five polyhedra, including the tetrahedron (pyramid), hexahedron (cube), octahedron (eight faces), dodecahedron (twelve faces) and icosahedron (twenty faces). Like the Flower of Life and the Merkaba, they belong to sacred geometry as the language of universal creation. They thus appear in all mineral, vegetable and animal forms, from crystalline structures to viruses and the molecular structure of the human body.

A synthesis of the Universe

Thus, metaphysically, the Metatron cube contains within it all the components of Life. The shapes that compose it are so many patterns with powerful waves, designating different aspects of the Universe.

The Flower of Life, for example, which is found in the Metatron Cube, would be a basic form for all creation in the Universe. It would be found in particular, like Plato's solids, in many manifestations of life.

Moreover, each of the Plato solids of which the Metatron Cube is composed is associated with a fundamental element (earth, water, air, fire and "All" or ether).

Finally, the Merkaba is a form described by spiritual traditions as capable of uniting the different planes of existence.

The Metatron Cube can therefore be broadly understood as a complete symbol. It synthesizes the Universe as a whole and its different levels.

A total, all-encompassing dimension that allows us to better understand its success as a symbol of protection, healing and spiritual expansion.

Integrated into your daily life, the Metatron cube can help you in many ways.

First of all, it will be an excellent way to invoke its eponymous archangel and benefit from his guidance. It is said that Métatron, having a good knowledge of human experience, is a very good advice for any decision making related to the material world. If you are not too sure of the best path to take, this angelic guide will be able to direct you towards the best way to follow. It will then be enough for you to meditate for a while with its symbol and to ask your questions or express your doubts internally... and remain attentive to the intuitions which come to you!

Generally speaking, the Metatron cube placed as a symbol in a living space will invite at all times the luminous and benevolent presence of the Archangel of the Archangels.

This complex and mystical symbol is, moreover, frequently used as a symbol of protection. Guardian of life, promoting peace and harmony, its high vibratory rate will keep bad energies away! It will be particularly effective worn on oneself or placed in a place of life.

The high vibration of the Metatron Cube also makes it a powerful tool to increase the vibratory rate of a space or a person.

And, as you certainly know, the higher the energy is, the better it flows, promoting harmony on both the physical and subtle levels. All in all, when invoked regularly, the Metatron Cube can therefore vibrationaly contribute to the healing and well-being of body and mind.

Finally, the Métatron cube would be a beneficial symbol for hypersensitive people, especially children. It would indeed reassure them by helping them to remain anchored, while welcoming their sometimes intense feelings.

How to use the Metatron cube?

You can integrate the Métatron cube into your daily life in several ways...

The most common is, of course, to meditate with him. To do this, keep him close to you during a session, in the form of a talisman or a drawing on a canvas, for example. You can then either concentrate on its central circle, or observe its pattern before closing your eyes and imagining it around you.

If your meditation has no other purpose than to connect you to your inner peace, imagine the vibration of the pattern spreading through you. You can visualize it as white light emanating from the symbol and flooding your entire body, bringing you serenity, healing and inspiration.

For a question-oriented meditation, visualize the symbol or observe it, while focusing on your question. Then, remain attentive to the messages, images and impressions that emerge... A bright idea may come to you and inspire you to take the action that is right for you!

Fascinated by the complex and powerful Metatron cube? Share this article with your friends to help them find guidance and protection.