Meaning of the lotus flower 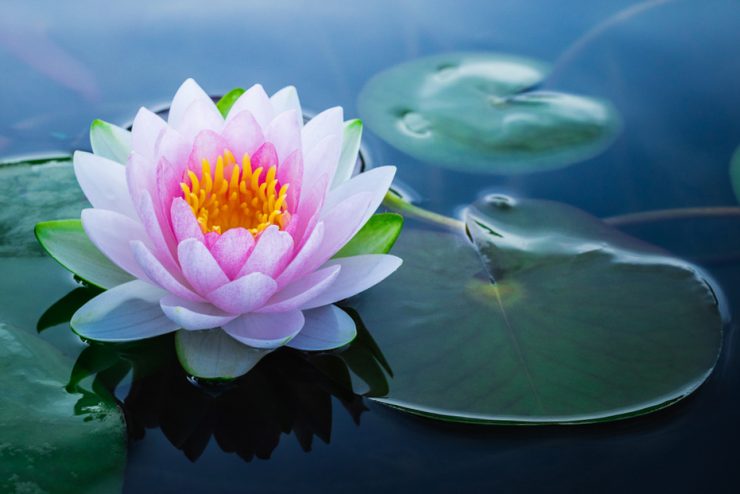 Meaning of the lotus flower

Called padma in Sanskrit and Tibetan language, the lotus is adorned with a symbolism as beautiful and rich as its flower.

Rooted in muddy waters, it blooms gracefully in hues ranging from blue to white, pink and red. It is found in India, China and Egypt, three regions where it occupies an important place in the spiritual tradition. Although its symbolism differs from one region to another and according to its color, it always revolves around the notion of fulfillment.

Thus, symbol of the path of awakening and blossoming of the soul, the lotus flower reminds us that all obstacles can be overcome. It unfolds its petals in the sun while remaining anchored in its soil, in the image of the human being who transcends his original difficulties to achieve peace and happiness.

Let its fragrance and beauty enchant your senses and inspire you to rise to other skies...

The lotus flower in Buddhism

Buddhism reserves to the lotus flower an essential place. Nelumbo nucifera is in fact in this philosophy the sacred flower par excellence, symbolizing the blossoming of the being in the course of existence.

This can be seen first in Buddhist mythology and art, where the lotus flower is a central element. Buddha thus appears there frequently sitting on a lotus flower. It is also said that nelumbo nucifera bloomed under his footsteps. The Tibetan mantra Om Mani Padme Hum, one of the main mantras of Buddhism, also invokes the lotus flower as a symbol of compassion.

The lotus has such an important place in Buddhism, not least because of its unique process of blossoming, which is seen as a perfect mirror of the spiritual path.

Thus, the lotus flower takes root in the mud of ponds and ponds. This initial context of blossoming, most earthly and humble, represents samsara, the initial suffering of the human being. A suffering linked to conditioning, limiting beliefs and attachment to matter.

The spirit thus begins its earthly and spiritual journey as a small bud, folded up on itself and still limited by its environment. By living in accordance with the Buddhist principles of purity, compassion and meditation, the mind evolves and blossoms like the lotus flower. Like the lotus flower, which grows in a dark environment, pierces the surface of the water and blooms in the sun, the soul transcends the difficulties and sufferings of existence to unfold.

Blossoming above the water, it remains perfect and is no longer affected by its physical environment and its impurities. It thus also represents the non-attachment to the material world, reached by the spiritually accomplished soul.

A different meaning depending on the color

As mentioned above, the lotus occurs in nature in a multitude of shades. Also, in Buddhism, it has a different symbolism according to its color.

Thus, a blue lotus flower is a symbol of wisdom and intelligence of the mind, while a white lotus will represent the bodhi, or state of enlightenment and purity.

Violet, the lotus with its eight petals will signify the "noble eightfold path", the name given to the Buddha's path of spiritual attainment. This path includes the eight principles of spiritual awakening: right sight, right thought, right speech, right action, right livelihood, right effort, right attention, right concentration. Rose, the lotus flower will be the symbol of the Buddha himself.

Finally, a red lotus will represent love and compassion emanating from the heart.

In Hinduism, the flower of the divinity

Hinduism, a polytheistic religion (devoted to several deities), mainly associates the lotus flower with the world of the divine. It is thus frequently represented alongside the Hindu gods and goddesses, who wear it in their hands or stand in its heart.

Sacred writings suggest, for example, that the god Brahma was born from a lotus flower that appeared in the navel of the god Vishnu. Krishna, a representation of divine beauty, is nicknamed the "lotus-eyed god".

Just like Buddhism, Hinduism confers to the lotus a symbolism related to its blossoming. Able to grow in a dark and muddy environment, its flower finally rises above its environment to blossom, immaculate and glorious.

For the Hindus, the lotus flower enjoins man to get rid of the confusion and temptations of his material context in order to blossom spiritually. In this sense, it represents among other things :

• The purity, because the flower remains beautiful and perfect, in spite of the "dirt" of its growing environment,
• The development of the soul, represented by the unfolding of its many petals,
• The eternity of life and rebirth, because the flower closes at night to be "reborn" each day. 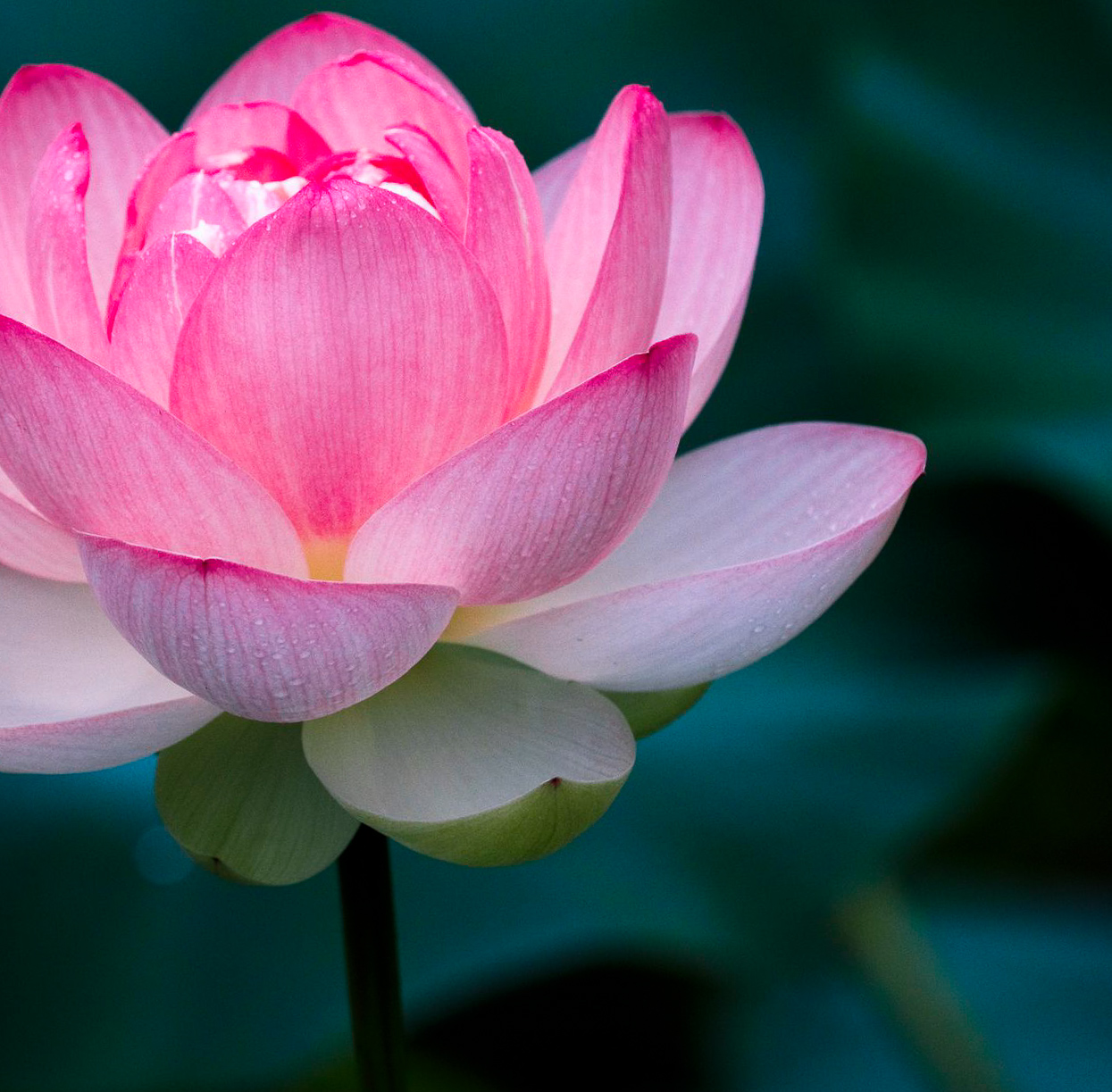 The meaning of the lotus flower in ancient Egypt

In Egypt, the lotus comes in its blue form, and is actually closer to the water lily than to the sacred lotus of India. Nymphaea caerulea is still revered in ancient Egypt as a spiritual flower with strong symbolism.

Nymphaea caerulea can be found at the top of temple columns, on wall decorations in tombs, and in goldsmith's and silversmith's work, where it decorates rings, bracelets, and pectorals (pieces of jewelry worn on the chest).

It is, above all, a symbol of rebirth. Indeed, this variety of lotus not only closes its petals at nightfall, but also sinks completely under water. In the morning, the lotus emerges and unfolds again. The phenomenon repeats itself daily, recalling the eternal cycle of life and death, a fundamental notion in Egyptian spirituality.

Its appearance also echoes sacred imagery: yellow at its center, blue at its periphery, the lotus is reminiscent of the sun shining in the azure sky. The daily rhythm of its flowers, which open during the day and close at night, evokes the creation and course of the sun. After crossing the sky, the sun takes refuge in the dark wave before emerging again the next day, reborn forever.

In meditation and yoga

Even if you are a beginner in yoga or meditation, you are undoubtedly familiar with the Lotus position, which is very important in hatha yoga.

You sit in a suit, with your legs crossed and bent. In the total posture, each ankle is placed on the opposite thigh, and the soles of the feet face the sky. This pose is named after its shape, which reminds us of a lotus flower with its petals spread out.

It would allow one to reach a deep meditative state, and is therefore adopted mainly for breathing exercises, relaxation and inner contemplation. The Lotus position would also help to release the energy stored in the hips, where the kundalini is coiled, a mystical energy contributing to spiritual awakening.

Furthermore, in meditation, the Lotus position is often associated with mudras, or hand positions. These sacred forms, created by precisely positioning the palms and fingers, would help to awaken certain energies of being.

Thus, Padma Mudra, the Lotus mudra, would open the heart chakra and awaken this center of compassion. To form Padma Mudra, the base of the two palms are first glued together. The thumbs and little fingers touch each other, while the other fingers open as if to form a lotus flower. The picture above shows you the example. Practice this beautiful mudra regularly to help your heart center display its full strength and compassion.

Touched by the beauty and symbolism of the lotus flower? Feel free to share this article with your friends and family! 😉