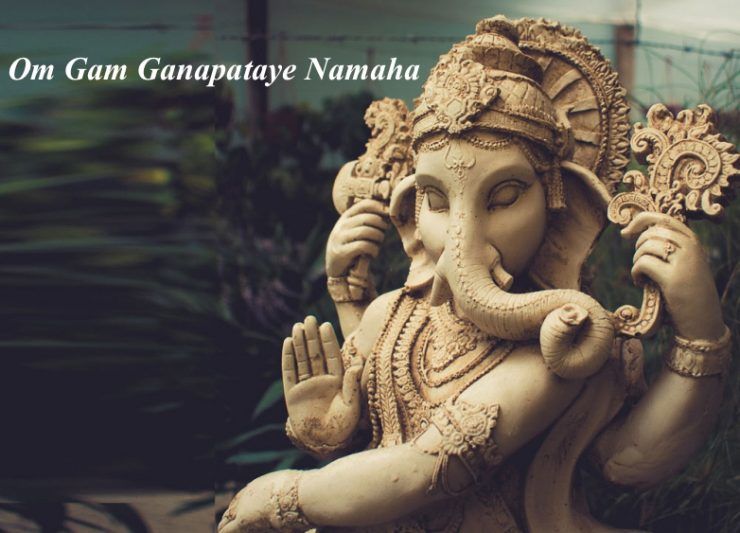 Watching us with his warm eye, Ganesh, the Hindu elephant god, is always ready to reach out and trick us!

Just invoke him with the mantra om gam ganapataye namaha, and difficulties go up in smoke. Or we find an effective way to overcome them to achieve success and abundance.

Discover with us the generous Ganesh and the meaning of his mantra...

The mantra of the god Ganesh, the one who neutralizes obstacles.

Ganesh is the very popular Hindu elephant-headed god. You've probably already come across this intriguing figure in a yoga studio or esoteric bookstore. Some even go so far as to get his silhouette tattooed, a way as original as it is radical to invoke his beneficial energies!

In Hindu mythology, Ganesh is a powerful deity, known for his ability to remove obstacles and promote prosperity. In addition to his famous elephantine head (whose origin varies according to sacred texts), he is often represented with four arms, and a single tusk instead of two. Three of his hands hold an object representing his power and virtues. The fourth usually opens toward the disciple, a sign of benevolence and abundance.

This mantra is used to remove barriers and ensure success in all businesses. With the generous energy of the elephant-headed god, one finds the anchoring and assurance necessary for success.

Abundance on the earthly plane is always accessible, just trust the process, This is what Ganesh blows us...

Om gam ganapataye namaha can generally be translated as "I salute Lord Ganesh." or "I salute the one who removes obstacles." This is a Sanskrit mantra from the Ganapati Upanishad, a sacred text dedicated to the worship of Ganesh and derived from the Vedas.

The formula is divided into four distinct parts:

Om is the universal sound, the sound form of the divine from which all creation comes. As you may have noticed, it is the first particle in many mantras, and initiates the whole formula,

• Gam is a version of the name Ganesha (Ganesh). It is a bija mantra, or monosyllabic phoneme constituting the basis of the entire name of the god. The bija mantras are also perceived as primordial sounds, just like Om,

• Ganapataye is another name of Ganesh, Ganapati. The end of the word, -aye, means "for", "dedicated to", so the mantra is dedicated to Ganapati,

• Namaha means "Greetings", or "My greetings": as a whole, the mantra thus means "I present my greetings to Ganesh."

Use and benefits of Om Gam Ganapataye Namaha

To use the mantra om gam ganapataye namaha, several options are available to you. First, you can choose to focus an entire meditation session around this mantra.

Sitting in a comfortable position on your meditation cushion, take a few deep breaths. Think of an area of your life or a project that would benefit from the power of Ganesh. This may be, for example, to overcome certain obstacles or to ensure success.

Then say or chant the mantra, as in the video included in this article. If you wish, add a small statuette of the elephant god to your meditation to make the invocation more powerful.

You can also simply recite the mantra internally during your daily commutes, your morning jog or after a yoga session.

The idea is to let yourself be penetrated by the sounds and vibration of this beautiful formula. In addition to invoking the powers of Ganesh, it acts directly on the root chakra. After all, Ganesh is a god of the earth, guarantor of success and confidence in the material world! The mantra's action on this energy center will result in deep inner peace, confidence in your actions and increased vitality.

You should know that there are several other mantras to invoke the energy of Ganesh, each emphasizing an aspect of the elephant god. For example, om ekadantaya namah focuses on Ganesh's (ekadanta) unique defense to signify Divine Unity and concentration in that unity.

Om vighna nashanaya namah, on the other hand, emphasizes Ganesh's power to remove all obstacles and blockages, whether these occur physically, in the body or external environment, or energetically, in the mind and subtle bodies.