The meaning of the mantra Om Tare Ture Soha 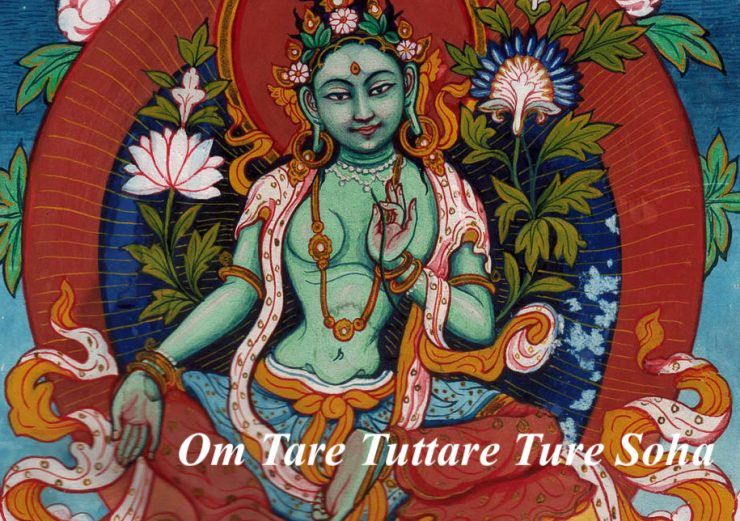 The meaning of the mantra Om Tare Ture Soha

In Tibet, Om tare tuttare ture soha is an ancient mantra dedicated to Tara, the "mother of all Buddhas", and particularly to her manifestation in the form of Green Tara.

It is used to invoke Tara's protection, compassion, and help in cultivating abundance and success.

In this article, you will learn a little more about this mysterious deity, as well as the meaning of its mantra ...

The mantra of Tara, the goddess of compassion

In the Buddhist tradition, Tara is a bodhisattva, or Buddha of compassion through action. In other words, a protective energy or entity that comes to soothe human pain.

Tara has 21 major forms, each with a specific color and spiritual quality. Among these 21 appearances are two very popular forms: White Tara, associated with compassion and longevity, and Green Tara, corresponding to abundance and inspired action.

Whichever form of Tara it is dedicated to, this mantra is recited to invoke the protection and guidance of the deity. Tibetans chant it especially before a long journey, in case of illness, or to find comfort in the loving vibration of Tara. Associated with Green Tara, in particular, it is also used to cultivate abundance and prosperity.

Generally speaking, Tara's mantra helps the mind to free itself from illusions and suffering related to the material world.

• the lions, corresponding to pride,
• wild elephants, associated with ignorance,
• forest fires, symbolizing hatred,
• snakes, representing jealousy,
• thieves, for distorted views of the mind,
• prisons, representing greed,
• floods, for desire and attachment,
• demons, for the doubt caused by the illusion of the mind.

The meaning of om tare tuttare ture soha can be summarized as follows: "I prostrate before the Liberator, Mother of all Victorious". In fact, it is a matter of returning to the benevolent and nourishing vibration of Tara through the chanting of her mantra.

The mantra consists of several parts:

• Om, the universal sound, is also the invocative phoneme at the beginning of the mantra,
• tare represents Tara's liberating and omnipresent power in the face of suffering,
• tuttare liberates from the eight dangers, or obstacles of the mind, mentioned above,
• ture releases from the disease,
• soha represents the path that this blessing takes to the heart. In other words, by relying on Tara, one receives Tara's saving energy directly through the center of the heart. This mantra reminds us that a life lived from the heart is a life of compassion, joy, abundance and purity.

How to use this mantra?

To use Tara's mantra properly, you may choose to recite or chant it at a quiet time of day, for example early in the morning, or before going to sleep. At these times, the mind will be more receptive to the energies of the mantra.

If you wish, think of a problem or area of your life where Tara's intervention would be particularly beneficial, such as your finances or your health.

Then, as you recite the mantra, imagine a green light filling you up and bringing all the blessings you desire. You will soon feel a deep serenity, and a confidence that your worries will be resolved close to your concerns or that your aspirations will manifest themselves in the material world.