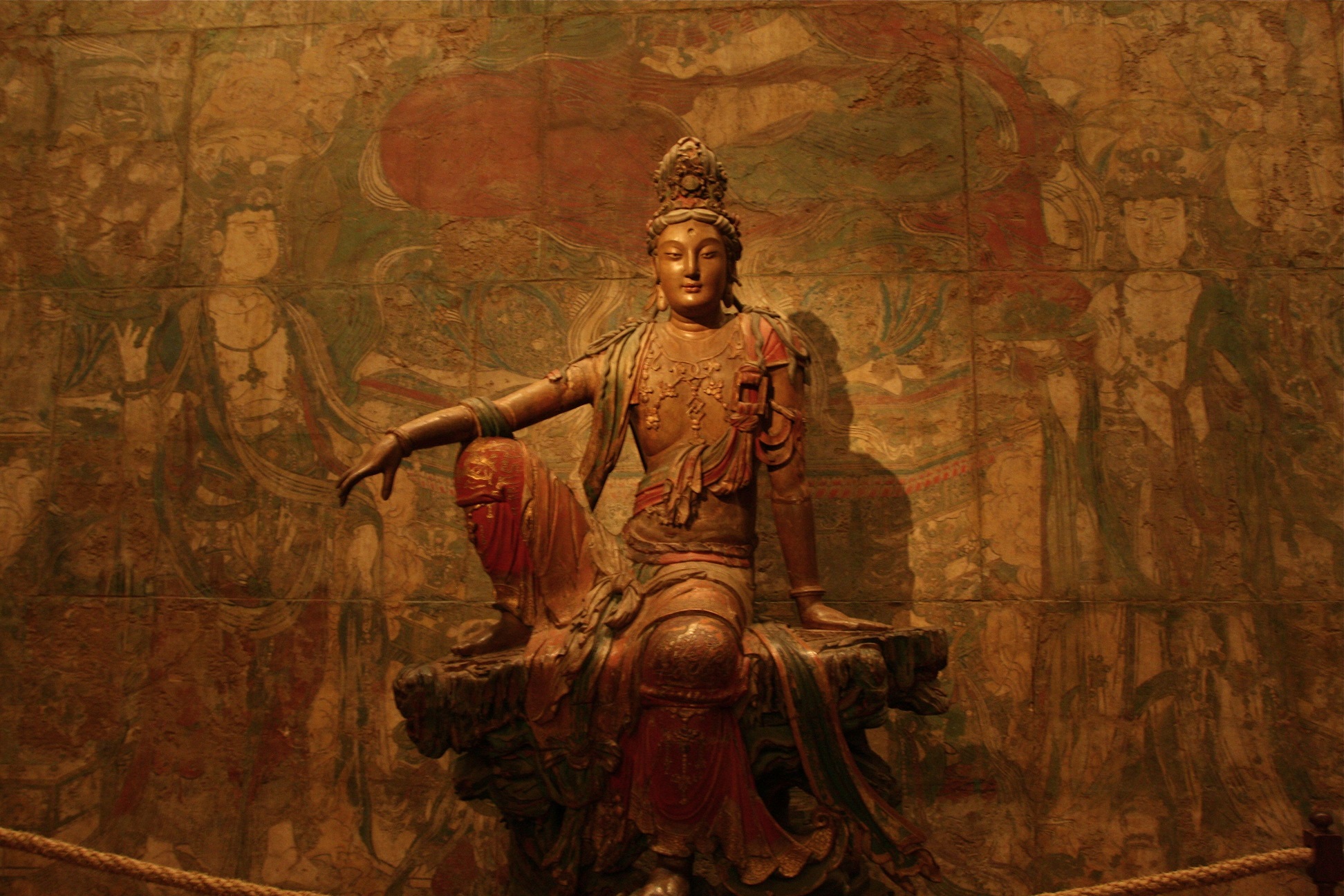 Tara Bodhisattva is a Buddhist goddess of love, benevolence and protection. She is revered as the Mother of Buddha. According to the writings, Tara would come out of a Lotus flower blooming with a tear from the frontal eye of Bodhisattva Avalokitésvara.

Tara is the image of a protective and caring mother

Tara Bodhisattva is one of the popular deities in Hindu spiritualism and Buddhism. Tara's vastness and wisdom has spanned Eastern religions and cultures.

Among Hindus, Tara made her first appearance in the 6th century. She is worshipped as Shakti, the wife of Avalokitésvara. Among Buddhists, the cult of Tara became popular in the 11th century. Tara is regarded as the embodiment of female compassion. She is the refuge of the Buddhists, solicited for her external and internal protection. Tara gives her blessing during spiritual upliftment.

As a feminine guide, she is consulted to perfect personal development and to perfect studies. Her feminine gait proves that enlightenment could be attained by women as well. This light is relative to the feminine characters: merciful and benevolent.

Tara Bodhisattva is the most popular deity in Tibet. It is omnipresent responding to both those in worship and those in captivity. During initiation, Tara releases an energy of compassion in each Initiate. This goddess is represented in several forms, attributed according to the needs of the worshipper. Tara also takes on different colors and each color will have its meaning.

Essentially, Tara Bodhisattva will have 21 forms, of different positions and different colors. Tara will have serene features, just as she may have irritated attributes. Her role is often likened to the Madonna in Rome, Buddhists do not feel offended by this approximation. This Buddhist goddess of love symbolizes precisely maternal compassion. Wife and mother, her great wisdom translates into unconditional love. In action, Tara delivers physical dangers with her miraculous powers. A meditation deity, Tara Bodhisattva is among the most revered Yidams.

Tara in all its forms and colors

Tara Bodhisattva presents herself in many forms as a Buddhist goddess. The 21 different forms of Tara are distinguished by their color and position. Each representation of Tara releases an energy that is characteristic of her. Friend, savior, she is above all the Mother of Wisdom. She is always available to help all those who invoke her. All shapes and colors retain the feminine features of the goddess.

However, these representations can have peaceful or furious expressions. Some of these forms are frequently called upon for meditation. In statuettes or paintings, Tara is present in any place and at any time. She is the main figure of the Buddha.

Among Buddhists, it is venerated by monks as well as by lay people. 6 figures of the Bodhisattva Tara are the most invoked, in temples or among practitioners.

Green Tara, also called Shyamatara, is the original Tara. It is the most common figure of Tara. It is represented in the seated position. It is characterized by the crystal between the two eyes and two Lotus flowers between the two hands. The color green is the most important symbol of greatness and compassion. The green Tara meditation gives access to protection from inner and outer dangers. It is invoked to fight against bad vibes such as pride, hatred and jealousy. It is also the protector against real dangers such as floods, thieves, fire or prison.

White Tara, also called Vajradhatvisvari, is one of the most popular. It can be recognized by its sitting position as a tailor, holding a Lotus stem in her right hand. It is also represented by the shape Cintācakra, the Wish Fulfilling Wheel. She is the deity of Long Life, Healing and Serenity. Invoking it allows negative energy to be transformed into positive energy. Meditating with White Tara can be practiced for oneself or for one's surroundings. People who are depressed or recovering are the most assiduous in invoking its compassion.

The Black Tara Mantra is the one who assists in the Samsara Ocean crossing. In a seated position, her right leg is extended with a royal posture. Her right hand on the knee translates permission. The Black Tara symbolizes the power that fights against evil spirits, as well as the diseases that are assimilated to them. It is the Tara of Power.

The Red Tara or Kurukulle, is the symbol of the destruction of illusion. It is also the representation of the spirit of discernment. Meditation with Red Tara gives access to the transmutation of desire. She wears a crown of five skulls representing the five perfections. Its red color translates its magical power enchanting and magnetizing. The Red Tara embodies passionate love with its attractive power. She transmits the power of this positive attraction to the beings who worship her.

Yellow Tara, assimilated to Vasundhara, invokes the energy of wealth and prosperity. It is the adored Tara of those who fight against poverty. She guides the disciples in generosity. It also brings patience and joy in effort. In order to achieve wealth, Yellow Tara tempers negative inclinations such as greed, distraction or laziness. The search for prosperity is not only about the development of the material life, it also concerns the spiritual life. Meditations can be directed towards oneself or towards others.

Blue Tara, often identified with Ekajati, is the Fierce Tara among Buddhists. Blue Tara symbolizes the transmutation of anger. It also helps in the liberation of obstacles. With its dynamic attitude, it evokes power. She is assigned the role of assistant to the Green Tara. Blue Tara can be presented with four to twenty-four arms.