In Jewish mysticism, it is even evoked as a "chariot" allowing the human being to access the divine world, or other planes of consciousness...

Integrated into your life, this esoteric motif will bring you protection, vitality and spiritual fulfillment.

Read on to learn more about the merkaba, its meaning and use!

The merkaba is a most intriguing symbol... With its unique and complex shape, it plunges its observer into a meditative silence. If you have ever come across it, it may have evoked a diamond or, at the very least, a strange crystal pointing in several directions.

Geometrically, it is composed of two interlocking pyramids, one pointing upwards and the other downwards, forming a double tetrahedron. Wasn't math and geometry your cup of tea at school? To better visualize it, you can also imagine a Jewish Star of David in three dimensions.

It is also frequently depicted with a human figure at its center, to represent its entanglement in all levels of being. For, as we will see, this mystical symbol would play a key role in spiritual and human evolution...

Let us add that the merkaba appears in the great family of symbols of sacred geometry. As a reminder, this esoteric discipline aims to invoke the energetic and spiritual properties of particular geometric forms to uplift the human being.

An energy field and a vehicle to other dimensions

From a metaphysical point of view, the merkaba would be a kind of crystal of light present in every human being in a subtle plane. Its two pyramids would rotate rapidly in opposite directions, generating a powerful energy field around the individual. This energy field would ensure, among other things, protection and vitality.

Furthermore, the pyramid pointing upwards would represent the masculine, channeling the energies of the cosmos. The pyramid pointing downwards would represent the feminine, conveying the energies of the earth. The merkaba would therefore also be a symbol of union between these two fundamental principles of the universe, and would allow the masculine and feminine in each one to be balanced.

In a more general way, the merkaba is perceived as a powerful form making it possible to join together and harmonize all the plans of the being. With it, the physical, mental, emotional and spiritual dimensions could work in harmony. Such a balance would then guarantee the expansion and elevation of the being towards the higher planes.

Also, in a deeper and more profound understanding, the merkaba would be a true vehicle to other parts of the Universe. Making the individual more evolved and conscious, it would thus promote the projection of the mind, or even of the whole being, towards invisible, subtle dimensions. As you will see below, the word "merkaba" can be translated as "chariot" or "boat" in different languages.

Meaning of the merkaba

The merkaba appears notably in the first chapter of the book of Ezekiel, one of the founding texts of Judaism.

"Merkaba" or "Merkavah" thus officially comes to us from Hebrew, and can then be translated as "chariot" or "zodiac", or in another sense, "Throne of God". Jewish mysticism evoking the merkaba states that one can reach this divine throne by repeating particular prayers or vocalizations.

The word is also found in the Arabic language, where it means "boat".

Some also believe that the word has an older origin. It is thought to have originated in Ancient Egypt and is related to the hieroglyph "Ma'at". Ma'at" would express clarity of mind, sincerity to oneself, and thus the Truth of Being.

In addition, the word "mer-ka-ba" can be divided into three distinct particles, whose meanings vary from one language to another, but have essentially the same meaning.

"Sea" would thus designate "light", understood as an energy present throughout the Universe. "Ka" can be translated as "spirit", or divine, etheric double. "Ba" could finally refer to the "body", in the sense of the individual and incarnated part living the earthly experience.

"Mer-ka-ba" could therefore be translated as the spirit/body surrounded by the universal light. Thus, referring to the mysterious etymology of the word, one understands better the unifying dimension of being through this sacred symbol.

Use of the merkaba

In some western spiritual traditions, the activation and use of merkaba would have several benefits for the practitioner.

If you wish to integrate this sacred symbol into your own spiritual practice, it could help you to :

• Activate the subtle and spiritual energies throughout your being,
• To harmonize the feminine and masculine principles within you, and to help you find the balance between inspiration and action, emotion and logical thinking,
• Stimulate your creative potential. 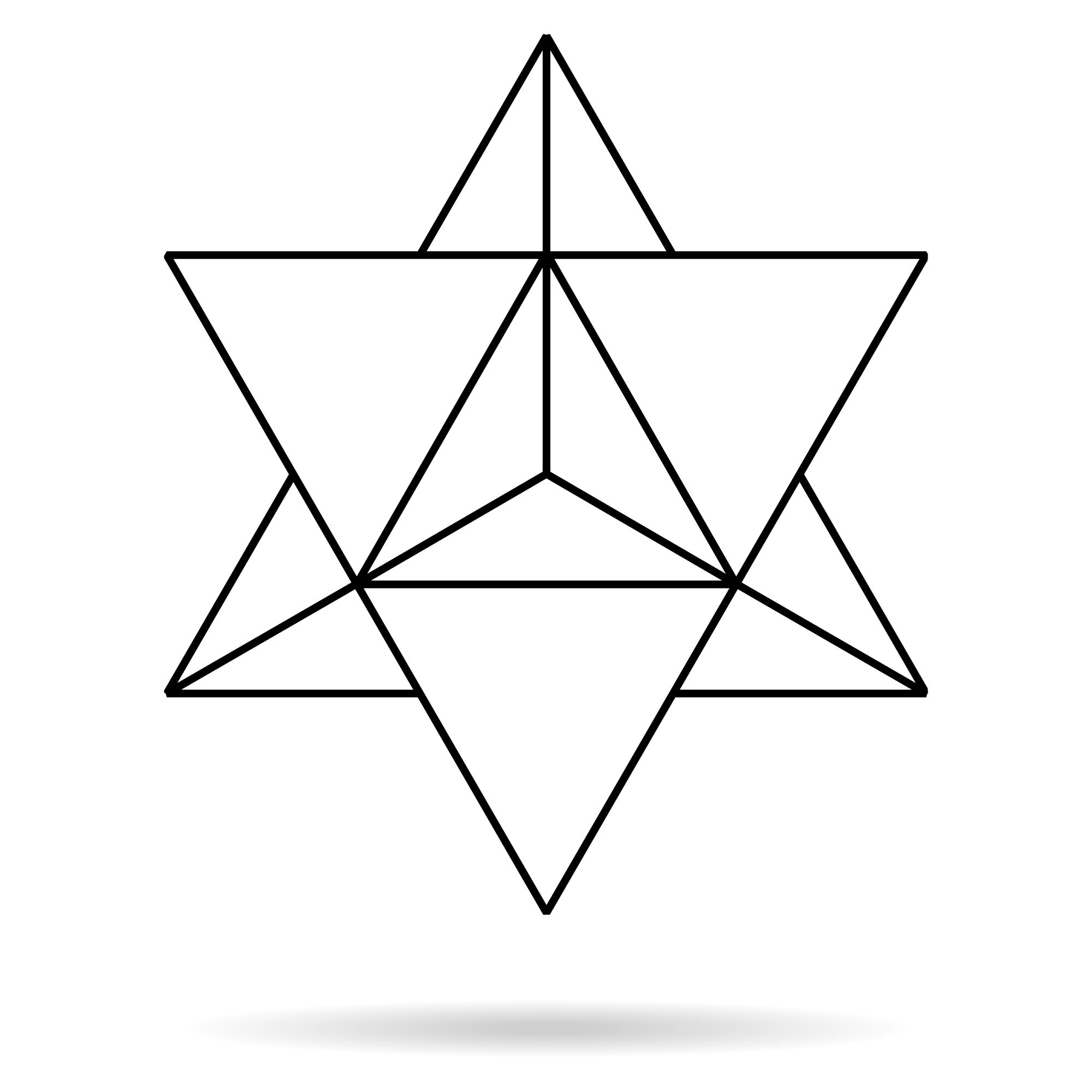 Meditating with the merkaba

To use the merkaba well, it is best to integrate it into your meditation practice. For this, several options are available to you.

First, you can immerse yourself in a meditation to activate this light energy. The activation of the merkaba would initiate the rotation of its two pyramids, allowing both the circulation of the vital energy in itself, and the creation of an energetic protective field. To do this, ask Metatron, the archangel in charge of this sacred polyhedron, to awaken its energy within you.

For a meditation with the merkaba, you can also simply invite its energy as a sacred geometric form to purify and elevate your being. Integrate it for example in the form of a drawing or a necklace. Breathe deeply, imagining that your symbol emits a gentle, warm wave that heals and uplifts you.

Finally, a simple yet powerful method to invoke the energy of the merkaba is to imagine it unfolding within you, or around you. Visualize the double tetrahedron stretching its protective branches throughout your individual sphere, for example in the form of white light. Let this energy spread throughout your being and your immediate environment, like a protective and beneficial vibratory field.

The benefits of merkaba

The activation of the merkaba would have several beneficial effects on the being.

First of all, it would help the vital energy, also called chi in Chinese medicine or prana in yoga, to circulate better. As you certainly know, the diffusion of this etheric fluid is stimulated by the energy centers or chakras. It takes place through subtle channels, or nadis, in the yogic vocabulary. Activating the merkaba in itself would therefore ensure a good circulation of this energy throughout the whole being, which would promote harmony and physical, emotional and energetic vitality.

It would also generate the creation of a protective energy field, ensuring the preservation of the being at the physical and subtle levels.

Moreover, the regular use of this sacred symbol would allow the harmonization of the masculine and feminine principles, also called Yin/Yang. The masculine is associated with structure and creative action in matter, while the feminine corresponds to intuition, dreams and emotions. Achieving a balance between these two poles of being will help you to cultivate harmony between your inner and outer life. In doing so, you will be able to take concrete steps in line with your ideas and inspirations.

Finally, the merkaba will help you to get in touch with other planes of existence. This vibratory "chariot" would have the capacity to take consciousness to subtle dimensions, or rather to anchor these planes in the earthly experience. It will thus help you to develop a richer and sharper perception of life, to see the different aspects of it and to feel more connected to yourself and to the universe.

Did you enjoy this article on the mystical merkaba? Share it with your friends and family! 🙂