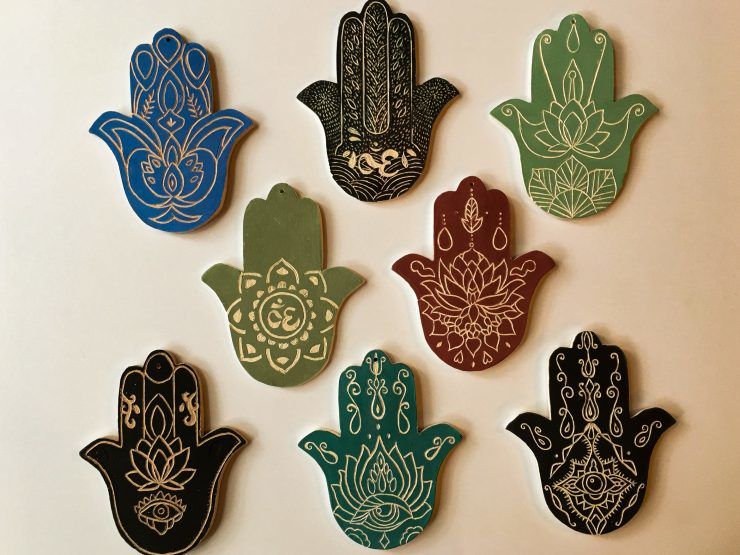 Do you know the hand of Fatma? This amulet, very present in North Africa, is used for protection and to guide its owner on the right path.

Widely seen as a religious symbol, especially Muslim, the hand of Fatma has however a universal dimension, and is in fact found everywhere in the world! It also bears many other names, such as Khamsa, Miriam's hand or Mary's hand, which denotes its omnipresence and universality.

Discover with us all the meanings of the hand of Fatma, and access its protective power...

The Hand of Fatma, a universal talisman

With its strange central eye, symmetrical fingers and varied appearances and ornaments, Fatma's hand is familiar to you, no doubt about it...

Also called Khamsa, Miriam's hand or Mary's hand, it is commonly perceived as a religious symbol. From this point of view, it is particularly associated with Islam and Arab culture.

However, it is found in many cultures that predate contemporary religions. The three main monotheisms, Judaism, Christianity and Islam, then simply integrated it into their own symbolism, giving it a new and enriched meaning.

In fact, everywhere and since the beginning of time, the symbol of the hand rises or lowers to protect, nourish and guide man through existence .

The use of the hand as a talismanic element dates back to the very first steps of mankind. Think for example of the cave paintings of more than 20,000 years old found in French caves, including stencilled hand motifs.

Nevertheless, the first pictorial presences of Fatma's hand as such date back to ancient Phoenician and then Carthaginian civilizations. These peoples radiated around the Mediterranean between 1200 and 150 BC.

Established notably in North Africa, equivalent to the current Mahgreb, as well as in the Middle East, these civilizations probably used the hand of Fatma as a symbol of protection.

The Carthaginians painted Khamsa-like hands on the grave markers of their high dignitaries. This hand actually represented the goddess Tanit, protector of the city of Carthage, and a deity associated with fertility, birth, and growth.

The omnipresence of the hand as a sacred symbol can be seen as far as Asia, particularly in Hindu and Buddhist traditions. It is then present there in particular as a vector of the mudras, specific positions of the fingers to support the circulation of energies.

The hand of Fatma then developed as a popular symbol through its use by the three great monotheistic religions.

The first of the three monotheisms, Judaism is thus probably the first religion to have incorporated the hand of Fatma into its symbolism.

It is referred to by another name, Hamsa, from the Hebrew hamesh meaning "five", a reference to the first five books of the Torah.

Hamsa is also called the "hand of Miriam" in the Jewish tradition. Miriam, sister of Moses, is among other things an incarnation of purity and wisdom. She is said to have ensured the dissemination of the sacred teachings to women.

A religious understanding of this amulet that perhaps gives the hand of Fatma its aura of femininity and gentleness.

Some Judaic interpretations of Fatma's hand finally see in her five fingers a reference to the fifth letter of the Hebrew alphabet, Heh. This letter would correspond, according to Jewish mystical tradition, to one of the names of God.

Hamsa, in Judaism, could therefore also represent the hand of God himself, who protects and guides the human being.

The symbolic power of the hand of Fatma can already be better understood as a vector of divine protection and guidance in Judaism...

The second Abrahamic religion, Christianity also appropriated Fatma's hand and her mystical aura to give it its own interpretations.

In Christianity, the hand of Fatma takes the name "hand of Mary". The first five books of the Jewish Torah form the basis of the Old Testament of the Christian Bible. There is thus a kinship between the two religions and their symbolism.

The hand of Fatma becomes, in this context, the hand of Mary, the mother of Jesus. The latter gives birth to Jesus through the Immaculate Conception, a birth whose only origin is the will of God. A feat that places Mary above the rest of humanity and makes her a saint.

The hand of Mary is therefore, according to Christianity, an emblem of the omnipotence of God, exercising his power through the actions of men. It also takes on a sense of fertility, creation and growth.

It is from the Muslim tradition that the Khamsa takes its most popular name, i.e. the hand of Fatma. In truth, its original Arabic name is Hand of Fatima. However, the -i, inaudible to the ears of Westerners who imported this symbol, has gradually disappeared.

The five fingers of the hand of Fatima are then associated with the five pillars of Islam, guiding the practitioners in their spiritual life. Or, more rarely, to the five letters of the Arabic name of God, Allah.

As we explained earlier, the hand of Fatima is not a religious symbol in itself. However, in general, it is widely integrated into Islamic culture as a symbol of good fortune and protection. For example, it is often found on the doors of houses to protect against evil spirits.

Associated with the daughter of the Prophet Mohammed whose name it bears, Fatima, it is then an amulet, able to stop the evil forces. Its raised hand opposes a clear stop to the legendary jinns, sorts of geniuses sometimes malevolent ... An eyeball often represented in the center of the palm protects him from the evil eye, or any evil intention or black magic.

The hand of Fatima is thus, in the Arab-Muslim culture also, carrier of an energy as powerful as soft. Divine hand watching closely over its holder, it confers protection and guidance in any circumstance. 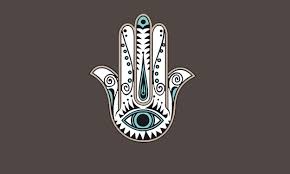 Meaning of the Khamsa or Hand of Fatma

After this presentation of the hand of Fatma in the different religions, you now have an idea of its overall meaning. Let us now depart from the religious domain to look at Khamsa in its more universal understandings .

Generally speaking, the hand of Fatma can be understood and used as a talisman, capable of :

• Provide care and nourishment,
• Keep bad energies away,
• Stimulate the creative capacity of the human being.

The hand of Fatma or Khamsa can be carried facing up or down.

"Towards the bottom, it is a sign of welcome and offering, guaranteeing prosperity. It then becomes a benevolent and nurturing hand, encouraging to accept the circumstances and to continue to evolve with them."

Wear it in this position, as a bracelet for example, to stay open to life's possibilities. Its energy will help you welcome what comes along with confidence while protecting you from misadventures.

At the same time, it will enjoin you to invest yourself fully in your development, nourishing and directing your energy towards the growth of your projects.

Symbol of fertility, especially when it is turned downwards, invite Fatma's hand in your daily life if you are trying to conceive .

It will then dissipate negative vibrations, ward off bad luck and counteract possible bad intentions towards you. Like an energy shield, it will ward off harmful energies and circumstances, and guide you towards favorable outcomes.

Its central eye will constantly keep you on the right track, ensuring security and clarity of mind. He will encourage you to discern the most constructive and relevant options for you.

Moreover, turned upwards, Fatma's hand becomes a receptacle for the positive energies to which she is exposed. Leave it for a while in the sun, for example, or in a place with a high vibratory rate. It will keep these beautiful vibrations in it to diffuse them around you when the need arises. 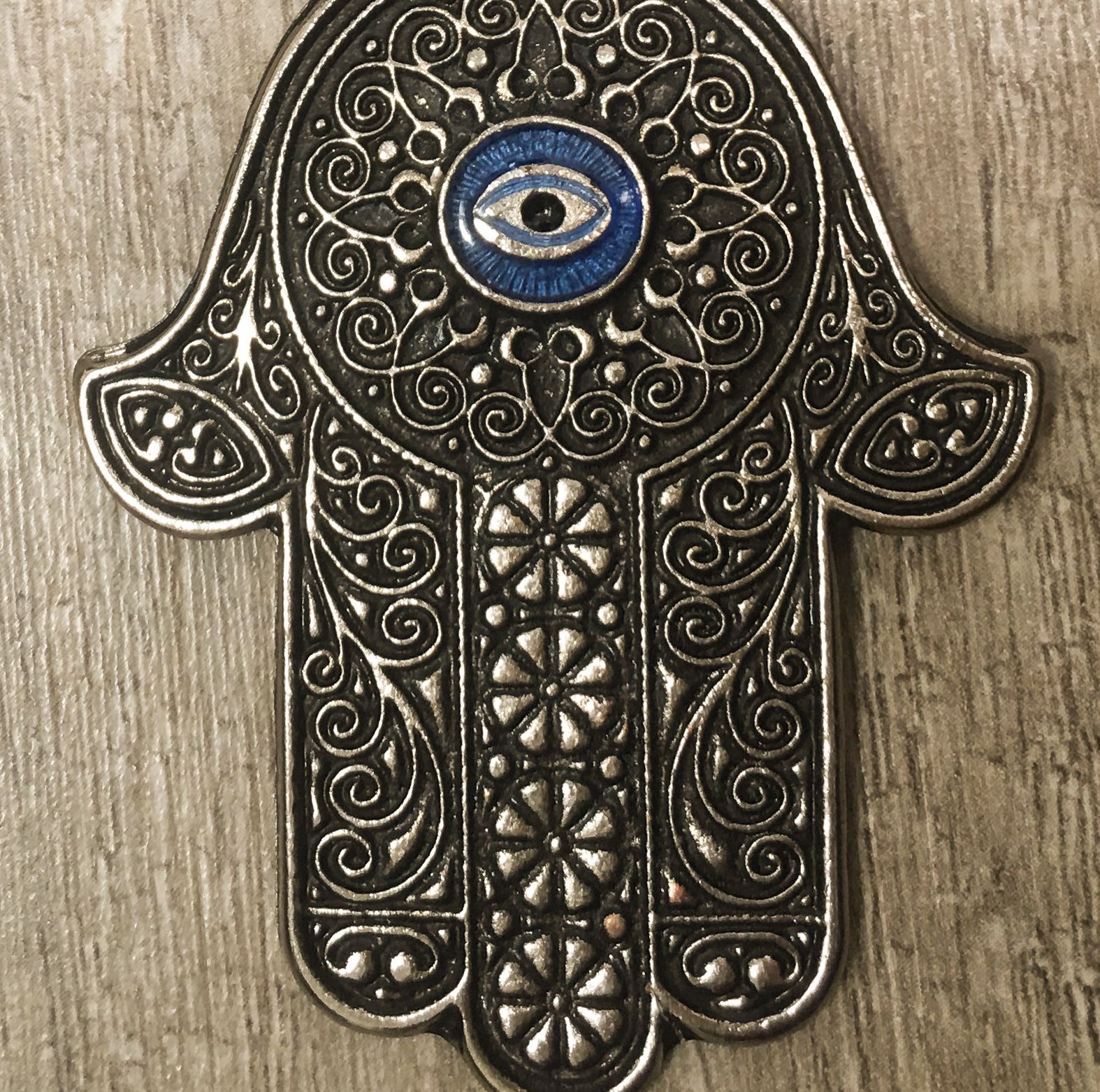 A symbol of your potential

The hand is the ultimate tool and symbol of creation. It is thanks to it that our ideas take shape in matter, that we communicate through writing, that we nourish and nurture others?

The hand of Fatma, both divine and human hand, can therefore also be understood as a representation of the creative potential of the human being. With and through it, we can follow our intuitions and aspirations, and act to give them consistency.

Therefore, use the hand of Fatma as a reminder of your own creative power. Whether it is to carry out your projects, to start a manual work or to embark on an artistic creation, her encouraging presence will push you to...get your hands dirty!