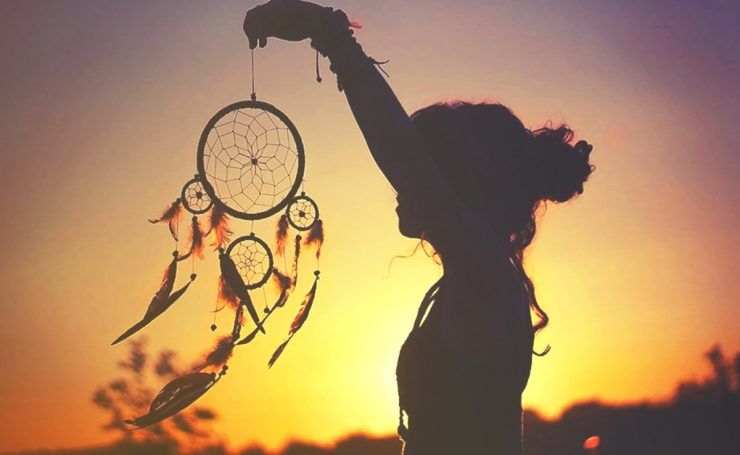 Dream catchers are powerful instruments of shamanic medicine whose origin dates back to the Indian tribes of North America. Its hoop, traditionally made of willow wood, represents the wheel of life. The mesh represents the dreams, desires and illusions we weave in our daily activities.

Emptiness, the creative spirit, the "great mystery" are at the center of the network.

According to tradition, dream catchers help to keep and filter good ideas as well as pleasant dreams by keeping negative thoughts and nightmares away from us that we might experience during the night.

During sleep, negative thoughts and energies are trapped by the dream catcher's mesh and are dissolved through the central hole at the first rays of the sun.

The meaning of the word Dreamcatcher

The word dreamcatcher comes from the English word dreamcatcher. However, in the Ojibwa language, to which this amulet is specific, it is called Asabikeshiinh, meaning spider; although it is also known as bawaajige nagwaagan or dream trap.

Dream catchers began to be marketed by the Ojibwa in the 1960s, and other tribes blamed their authors for desecrating their wonderful meaning. Indeed, they are currently manufactured and sold without taking into account the magical and mystical process of activation, losing its essence and becoming a simple ornament for houses.

The good news is that thanks to this commercialization, dream catchers have spread considerably in recent years. However, most of us do not know the legend behind these mystical objects...

The Legend of Dream Catcher

Legend has it that there was a spider woman named Asibikaashi who took care of the locals. The spider woman watched over every creature in our world. She would bend over the children's beds while weaving a fine, strong web capable of capturing evil and making it disappear at dawn.

As its inhabitants spread across North America, it became very difficult for her to take care of all the children. Mothers and grandmothers therefore had to start weaving nets with magical properties to trap nightmares, thus protecting the children.

Traditionally, the Ojibwa built dream catchers by tying willow threads around a 9-centimetre circular or teardrop hoop, resulting in a veil similar to a spider's web, which in turn was made from red-dyed nettle fiber.

The ancient legend of the Ojibwa Indians teaches us that dreams pass through the network of threads and filter the good dreams that will then slip through the feathers. However, bad dreams are trapped in the thread network in the center of the hoop and die with the first ray of daylight.

However, for the Lakota of the North American Sioux tribe, dream catchers work differently. That is, nightmares pass through the net while dreams get trapped in the threads and slide down the feathers to the person sleeping.

The bad is blocked, destroyed and the good remains with us.

There are people who give this a different meaning, understanding the word dreams as aspirations or desires. Therefore, dream catchers would be used to achieve everything we wish for.

The truth is that we cannot guarantee that dream catchers will keep away bad dreams, bad energies or bad vibrations, but it is nevertheless restful and calming to be in contact with an Indian dream catcher that exudes all the magic of Native American culture.

This culture has filled us and will always fill us with knowledge and millennial traditions that we must strive to respect as faithfully as possible, because in a way, we owe them much of our wisdom.