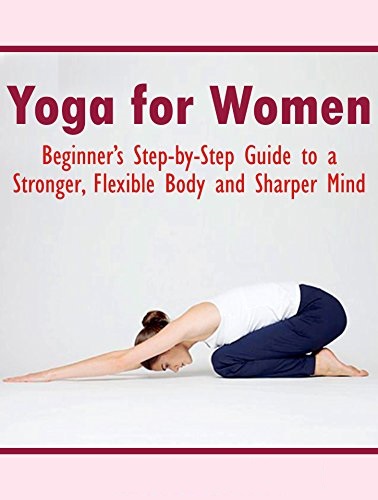 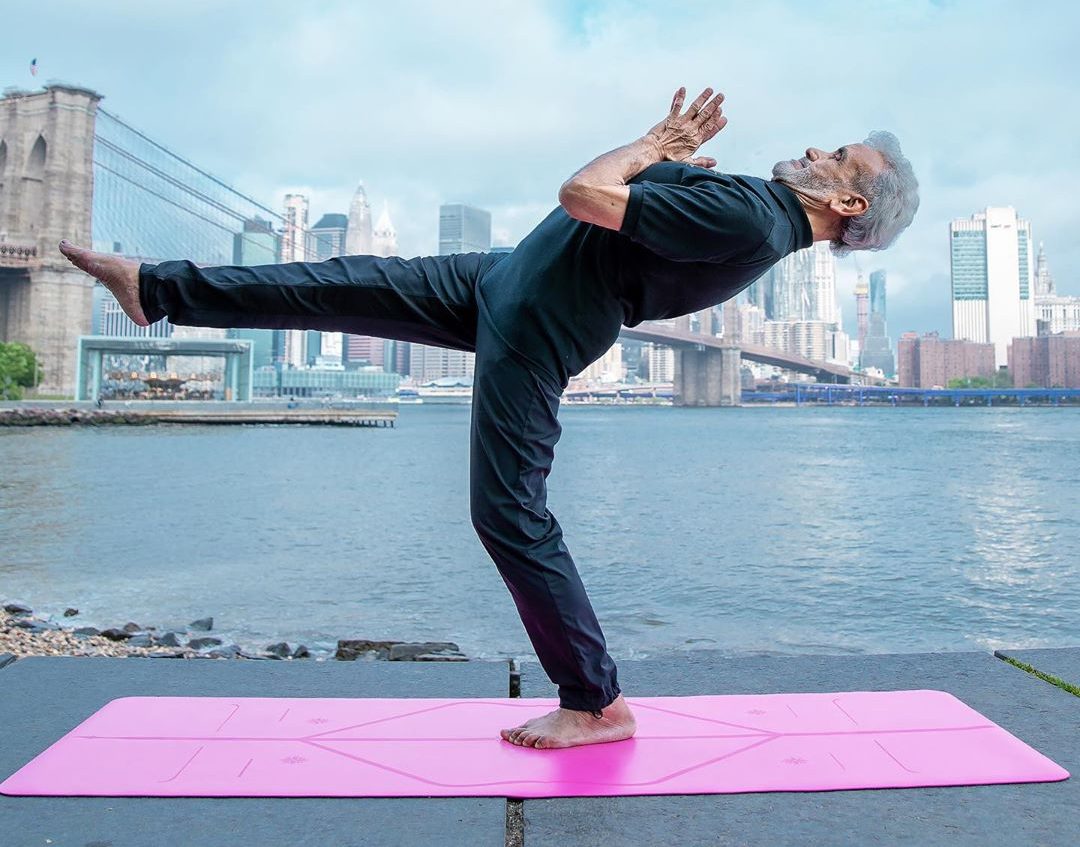 Dharma Yoga is certainly not the first style of yoga that one discovers when one begins this discipline. It's not the one you hear the most about and you may never even have heard of it. However, it was born from the age-old traditions of yoga and today offers an exciting style of practice to discover. Let's find out together what it is, who invented it and what benefits you can derive from it.

What is Dharma Yoga?

Dharma Yoga is a style of yoga particularly famous in North America. However, in Europe it is beginning to develop as well.

We owe its origin to Sri Dharma Mittra. This yogi master spent his entire life teaching yoga, especially in his studio in New York, the Dharma Yoga Center. Today, at the age of 80, Dharma Mittra continues to pass on his style to his students with the same passion and to train teachers. But what exactly is this type of yoga?

Dharma Yoga is a graceful and dynamic form of yoga that emphasizes the need for a kind heart and a clear mind. The method links together many of the teachings of traditional yoga to lead practitioners towards self-realization and deeper knowledge of themselves. The goal is not only the progression in the postures, but also and especially in meditation, to reach the state of Yoga (union). Traditionally, it is a form of Hatha-Raja Yoga.

Moreover, this style of yoga is suitable for all practitioners from beginner to advanced level.

A yoga linked to the notion of compassion

Dharma Yoga is related to the eight stages of traditional yoga such as Yamas and Niyamas. Indeed, for Sri Dharma Mittra, "without Yama and Niyama, there is no yoga". That is to say that for him, yoga is above all an ethical approach and life habits that do not harm others. The notion of Ahimsa (non-violence towards ourselves and other living beings) is also very important in Dharma Yoga. Dharma Mittra is notably a committed ambassador of veganism. However, he believes that everyone should advance on the path at his own pace and respects everyone's choices.

Thus, in Dharma Yoga, the emphasis is on compassion, which is felt even within the postures.

Origin of Dharma Yoga: Who is Sri Dharma Mittra?

Sri Dharma Mittra was born in 1939 in Brazil, in the small village of Pirapora. After moving to New York as an adult, he met his guru Swami Kailashanande, who was one of the greatest yoga masters of modern India. He was a student of the one also known as Yogi Gupta from the 1960's onwards for almost ten years.

Thus, Sri Dharma Mittra progressed in his practice and learned the traditions of yoga at his side (especially the eight branches of yoga). In addition, Dharma Mittra also spent several years of his life practicing Karma yoga full time. In particular, he was the personal assistant to his master Kailashananda before he initiated himself in 1966 as a Sannyasi, (a person who renounces the world and the ego in order to come closer to God).

Then Sri Dharma Mittra began teaching in 1967, after having spent 10 years as a full-time yogi. This first alongside his guru in his ashram and then in New York City from 1975. It was at this time that he founded the Dharma Yoga Center.

In addition, Dharma Mittra became known for practicing and photographing 908 asanas, which he compiled into a single work entitled Master Yoga Chart of 908 Postures in 1984. Today, this medium hangs in a multitude of ashrams and yoga studios around the world as a source of inspiration and teaching tool for students. He also published the book Asanas: 608 Yoga Poses in 2003 and a series of instructional videos in 2006.

Sri Dharma Mittra's vocation is to transmit yoga enthusiastically using the best possible methods. He advocates a fairly spiritual yoga and would like to lead his students to Self-realization. We owe him the following quote: "Everything is there, just turn it on. »

Dharma Yoga in practice: what does a session look like?

is similar to Vinyasa Yoga in that practitioners are encouraged to move in a single movement, like a dance. However, the practice also has a more difficult side as the postures are often held longer than in traditional Vinyasa.

The idea of having a unified movement is also important in group classes, between students. For Dharma Mittra, this leads to a unified consciousness, closer to self-knowledge. It is also a good way to support each other during practice.

Dharma Yoga includes many traditional yoga postures as well as breathing and meditation exercises. It focuses on clear thoughts, a healthy mind and a compassionate heart. 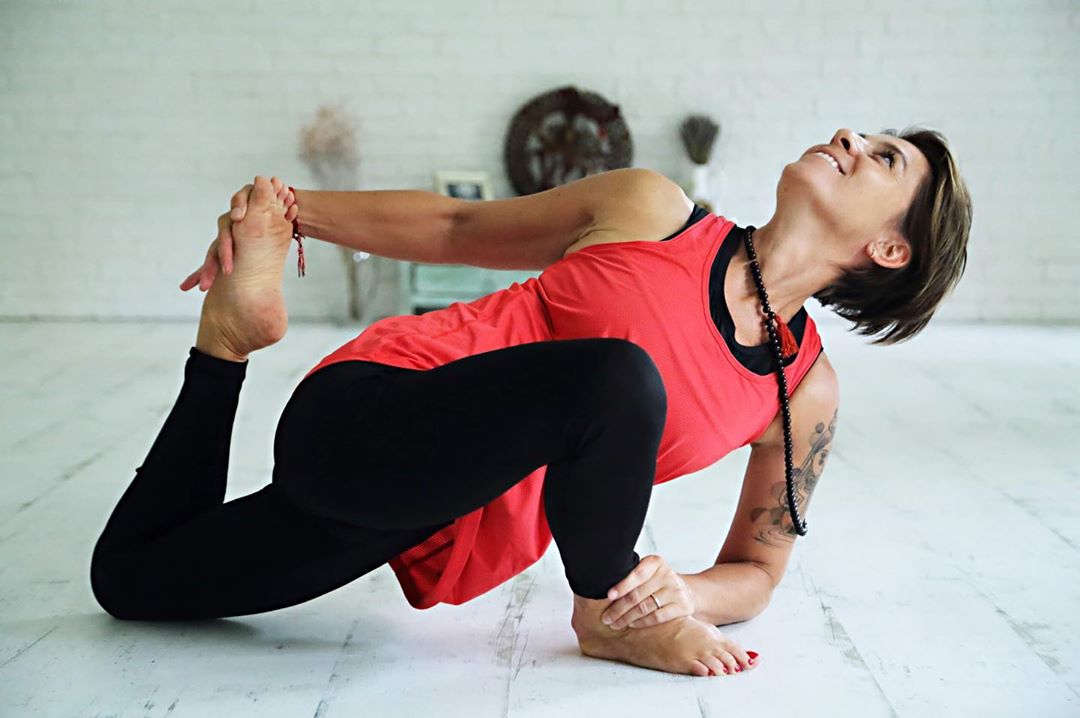 Other principles of Dharma Yoga

On the other hand, the courses are built around a sequence to be respected. Indeed, the movement allows the circulation of energy within the body, mind and spine. These sequences allow to relax step by step each part of the body but also the mind.

In addition, in the classes the teachers' indications are quite limited. The goal is to let each student find his own practice by looking inside himself. Thus, silence can sometimes be present in the room.

Moreover, each series of exercises begins with the left side of the body (except for the torsions as I explained here). In addition, the bending and opening of the heart exercises are predominant in the practice.

It is also common to practice inversions. For example, the practice of Sirsasana is common in Dharma Yoga. Dharma Mittra has several variations of it and generally includes it within its classes. The creator of Dharma Yoga is also known to stand on his head without hand support. This posture is called Niralamba Sirsasana (which I would advise you not to try at home until you have spent 20 years in an ashram).

What are the benefits of Dharma Yoga?

Dharma Yoga has many benefits that would be found in other postural yoga practices. Indeed, it allows us to :

However, there are some typical benefits of Dharma Yoga. Indeed, this type of yoga is particularly known to improve flexibility. The proposed exercises often consist of an important relaxation of the body and work the mobility of the bust. This is especially true with postures of opening the heart.

In addition, it also helps to develop strength. Indeed, Dharma Yoga is a rather dynamic practice, which helps to build muscles and strengthen the body in general.

Moreover, Dharma Yoga postures often mobilize the spine. Thus, this makes it possible to adopt a better posture, but also to muscularize and soften the back in order to avoid the installation of backache. 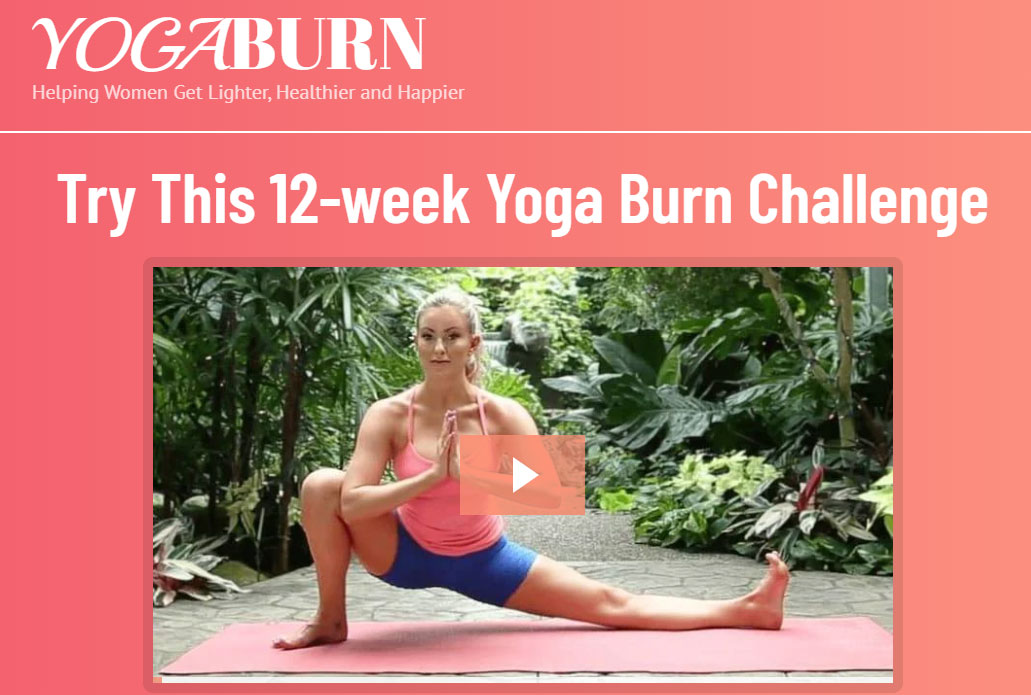 Sri Dharma Mittra has a very interesting vision of yoga. Indeed, for him, the purpose of any posture is to prepare for meditation. The ultimate step of yoga would be to surrender to the Supreme Soul or Wisdom. That is to say, to go beyond duality, to understand the ego and the origin of consciousness in order to be able to observe what is beyond. For him, to have an ethical behavior, made of compassion, is essential to arrive at this notion. Thus, he privileges the fact of meditating on compassion.

On the other hand, he deplores the fact that most people doing asanas today do not look inside themselves but rather towards their toes. They reflect, take care to correct their postures, keep their eyes open. They are not looking inward and seem to be only practicing physical activity. Thus, his yoga is based on maintaining the postures for several breaths to make them as simple and comfortable as possible.

In a recent interview, he shared his definition of yoga: "Yoga means: After having silenced the mind by practicing yogic techniques such as keeping yama and niyama, always being extremely compassionate towards everyone, through total surrender of the ego, attaining self-knowledge, much reflection and finally resting the mind on Brahman, the Almighty, for a long time, the individual soul becomes one with the universal soul. This divine union is yoga. All techniques are only preparations.

What is Dharma in Yoga?

Let it be said that the term "dharma" was not invented by Dharma Mittra. Indeed, it comes from Sanskrit and means "teaching". Although the term is often associated with Buddhism, it is also important in Hinduism and the culture of the Vedas. The Vedas are a collection of sacred texts found mainly in the Bhagavad Gita.

In these writings, Dharma is considered the "order of the world" or "the norm". It refers to the law and corresponds to one of the four purposes of existence with artha (acquisition), kama (pleasure) and moksha (liberation). It is a notion that refers to ethics and justice. It is sometimes compared to the term "karma" which is better known in the West (although it is often misinterpreted).

Thus, Dharma could be seen as the right action for oneself. This may be different from the right action depending on society or conditioning. It is said that if one does not follow one's Dharma, one risks feeling disharmonious and disunited (the opposite of yoga). Knowing one's Dharma, what is right for oneself, is also developing one's intuition and following one's own path, which produces harmony and makes us make choices in accordance with our values. It is therefore always interesting to take the time to reflect on our personal Dharma.

This time you know much more about Dharma Yoga, its history and its particularities. Don't hesitate to sign up for a Dharma Yoga class near you to learn more about this style of yoga. They are more and more numerous!